The sickest lie of all: This ex-Harrods manager convinced 600 people to give her £45,000 for ‘life-saving’ cancer treatment. The vile truth? She was healthy – and funding a luxury lifestyle. As she’s jailed, furious victims condemn her callousness

Eyes closed, her brow seemingly furrowed in pain, the slightly built young woman lying propped against the crisp white linen of the hospital bed appeared the image of vulnerability. The photograph, posted online, made it clear this was someone in desperate need.

Nicole Elkabbas, then 40, was said to have undergone three operations and six rounds of chemotherapy after being diagnosed with ovarian cancer, and now urgently needed money to pay for a breakthrough drug in Spain — the ‘only way she could be saved’.

Described as a ‘beautiful daughter’ and ‘loving mum’, Elkabbas appealed for help on the popular fundraising website GoFundMe.

It was compelling; so much so that more than 600 people — friends and strangers — donated sums ranging from a few pounds to thousands. 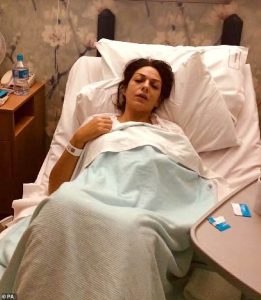