I Will Not Abandon Families Of Killed Policemen –Obiano 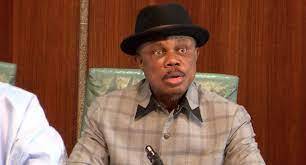 Governor of Anambra State, Willie Obiano, has assured families of policemen killed during an attack on Prof Charles Soludo that government would not abandon them.

The governor gave the assurance on Easter Sunday at a statewide broadcast to address the recent spate of violent attacks in the state.

He said, “To the families of the slain police officers, my heart once again goes out to you. I share in your grief and mourn with you. While I pray for the repose of the souls of the deceased, please be assured that the state government will not abandon you.”

READ ALSO: I supported Buhari because God told me he would stabilise Nigeria-Bakare
Obiano also offered Easter-themed prayers, admonishing citizens of the state to let the season permeate their hearts.

Some gunmen had on March 31, 2021 invaded a town hall meeting at Isuofia with three policemen killed in the attack while the state’s Commissioner for Public Utilities, Hon Emeka Ezenwanne, was also abducted.

“Since the incident and in our usual characteristics, the state security architecture had exerted an extensive effort to ensure the safety of the commissioner who eventually returned home in the early hours of 4th April 2021,″ the governor said.