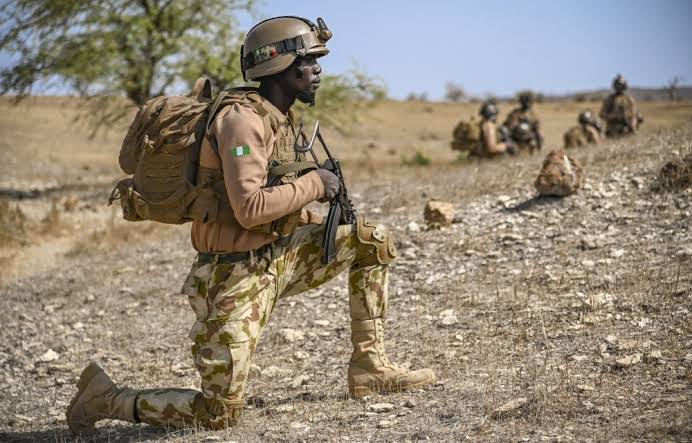 BY ERIC DUMO
One army officer and 10 soldiers were killed in  Benue State in what an official said was an unprovoked attack on Thursday.
The army said in a statement that it would “fish out and deal decisively with these bad elements.”
Civilians, in fear of soldiers looking to root out the perpetrators, were fleeing Konshisha Local Government Area where one local leader’s house had been burnt to the ground, sources told Reuters.
The violence in the restive Middle Belt region marked the latest bout of instability in Nigeria.
On Monday, heavily armed gunmen freed more than 1,800 prisoners in Imo State, while armed gangs have kidnapped hundreds of school children in the North-West in recent months and Islamist militants in the North-East have waged a decade-long insurgency.
READ ALSO:Delta, Kano set National Sports Festival records
Troops patrol in the Middle Belt due in part to clashes between farmers and nomadic cattle herders that have killed thousands and displaced half a million over the past decade, according to estimates from French medical charity Medecins Sans Frontieres.
Army spokesperson, Mohammed Yerima, said the troops were initially declared missing while on a routine operational task, but a search-and-rescue team later found the bodies.
“Efforts are ongoing to track down the perpetrators of this heinous crime with a view to bringing them to justice,” Yerima said in a statement.