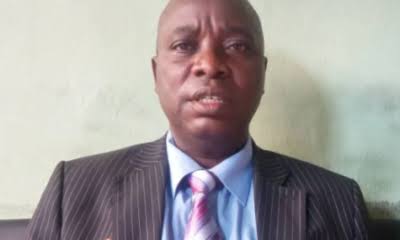 A chieftain of the New Nigerian Peoples Party, Olusegun Bamgbose, has chided Nigerians for re-electing President Muhammadu Buhari for a second term.

According to Bamgbose, Nigerians committed an unpardonable offence by re-electing Buhari in 2019.

The lawyer’s reaction was spurred by recent reports of incessant killings and kidnappings by armed bandits in the country.

The chieftain accused the Federal Government of watching as students and residents are being murdered mercilessly.

“This is inhuman, callous and barbaric. Our country is fast becoming a banana republic. This is so sad and very unfortunate,” he said.

Bamgbose condemned the recent reports of kidnappings and attacks over the last 24 hours.

Within this timeframe, two more Greenfield University students were found dead, five soldiers in Imo State were murdered, eight policemen in Kebbi State also lost their lives in an ambush, 19 herdsmen were also reportedly killed in Anambra State.
READ ALSO: Why I changed my mind about negotiating with Bandits —El-Rufai

“All these within 24 hours. It’s obvious we are already in hell. With all these, President Buhari is telling Nigerians that he will soon deal with the bandits,” the party chief said.

Bamgbose also challenged the current administration’s sluggish reaction to these calamitous reports, claiming that there would have been no patience if the country was in this situation during ex-President Goodluck Jonathan’s regime.

“Let’s tell ourselves the truth, Nigerians committed a great blunder re-electing Buhari in 2019.

“We can forgive those who voted for Buhari in 2015, but not those who re-elected him in 2019. What happens to the rest of those Greenfield University students who are still in captivity.

“Nigerians must rise up and think something out of the box before this nation is consumed by insecurity. We are in a serious mess.

“There is no justification for Buhari’s occupation of State House. This Buhari regime is becoming bloody. We need divine intervention,” he said.