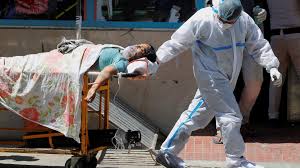 India’s Coronavirus death toll passed 200,000 on Wednesday with more than 3,000 fatalities reported in just 24 hours, as the World Health Organisation warned that a variant of COVID-19 to be contributing to a surge in cases in India has been found in 17 countries.

A total of 201,187 people have now died, 3,293 of them in the past day, according to health ministry data, although experts suspect that the true toll is higher.

India has now reported 18 million infections, an increase of 360,000 in 24 hours, which is a new world record.

The rapid rises in cases have been blamed on a new virus variant as well as mass political and religious events, which has overwhelmed hospitals with dire shortages of beds, drugs, and oxygen.

The worsening health crisis came as the World Health Organisation warned on Tuesday that the new COVID-19 variant, identified as B.1.617, had been detected in over 1,200 sequences uploaded to the GISAID open-access database “from at least 17 countries”.

“Most sequences were uploaded from India, the United Kingdom, USA and Singapore,” the WHO said in its weekly epidemiological update on the pandemic on Tuesday.