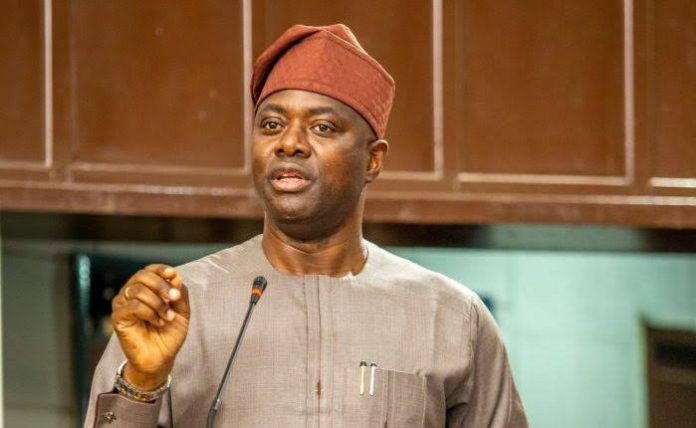 Oyo State Governor, ‘Seyi Makinde, on Wednesday, declared that Nigeria needed personalities like the out-going President of the Nigerian Baptist Convention, Reverend Dr. Samson Olasupo Ayokunle, who are keen on speaking truth to power always.
The governor stated this at the Baptist International Conference Centre, Lufuwape, on  the Lagos-Ibadan Expressway, Ogun State, during the occasion of the end of tenure and appreciation service for Rev. Dr Samson Olasupo Ayokunle and Pastor Mrs. Toyin Ayokunle, as the President of the Nigeria Baptist Convention.

A statement by the Chief Press Secretary to the governor, Mr. Taiwo Adisa, indicated that the governor  equally called on clerics to remain prayerful while citizens must be vigilant if the country must surmount its security challenges.

While congratulating Dr. Ayokunle on his 10 years of excellent service to the Baptist Convention in Nigeria, the governor urged the cleric to continue to be of service to Oyo State and the country at large.
He said, “I feel like the Psalmist, David, when he wrote in Psalm 122 vs 1, where he said: ‘I was glad when they said unto me, let us go into the House of the Lord.’
“So, I am here today to rejoice with Dr. Samson Ayokunle, who invited me to come to the House of the Lord’.

“This is indeed a great and happy day, especially for Dr. Ayokunle, as he presides over the Nigerian Baptist Convention for the last time as its serving President.
“I want to thank him for the opportunity to speak here and to also share a goodwill message. I do not take this for granted. “Well, I have chosen to build this message around excellence. “When a child goes to school and he scores 10 out of 10, the teacher will write excellent and put a pass mark.

READ ALSO: Senate approves N216.646bn for FIRS in 2021
“After serving as the President of the NBC for 10 years, Dr. Ayokunle has rendered excellent service to the Baptist Convention. Excellent is closely related to completeness and this is linked to that number 10.

“So, I want to congratulate you on the achievements and I do this on behalf of myself, my family, the government and the good people of Oyo State.
“Just as you have achieved excellence in service here and I can see that you are not tired, we want you to continue to be of service to our country and to our state.”
The governor also explained further that the past meetings with the cleric made a very big impact on him, saying that the Reverend never came to meet him for personal needs but on the enlargement and progress of Nigerian Baptist Convention.

He said, “After I became the Governor, we met a couple of times but two of those meetings actually made a very big impact on me. One, he came to me and said we need to raise prayer warriors; himself and some other prayer warriors in the state, because, according to him, the job of governing Oyo State is not for the faint-hearted. We raised those prayer warriors.
“The second time, he came to me regarding the land in Ogbomoso for the Baptist institution. The previous administration gave them a bill – N486m and I waived that. So, he never came to ask me anything for himself or his family but came to ask on behalf of the Nigerian Baptist Convention.

“So, I want to, on that note, wish my brother and spiritual father, Reverend Supo Ayokunle, God’s blessings.”
Makinde, who maintained that the qualities exhibited by the cleric during his service as the President of the NBC are worthy of emulation, promised that the current administration in Oyo State would continue to be transparent in its policies.
Similarly, the governor bemoaned the current state of insecurity in the country, promising that despite the increasing security challenges, his government would not relent in ensuring the safety and security of lives and properties in the state.
“Yes, we acknowledge that we are only human. Sometimes, we make mistakes and when we do, we need people like you to speak truth to power. This is indeed a trying period for us as a country, as there is restlessness all over the place. We also have economic difficulties and challenges but as your government and representative, we will not be deterred, Makinde added.
He, however, charged religious leaders across the country to continue to pray for the leaders, as, according to him, the government alone cannot work things out.
“The issue of insecurity is a very big challenge. We need prayers, we need you to continue to pray for the leaders in this country and continue to do your bit because the government alone cannot do it. My charge to you is that when you see something, you must say something and let the people in authority know where there are gaps.”
In the same vein, he enjoined Nigerian leaders and politicians to emulate the conduct of peaceful transition of power, saying,“When we hold our hands and work together just like Reverend Ayokunle, he is having a celebration to end his tenure, we have few things to learn as leaders and politicians because some of us like to take the seat back to our homes. But here, the transition is orderly and peaceful. We hope that the country will be able to achieve the same thing.
“So, we look forward to working together with you to tackle the problem of insecurity in the country.” Makinde said.
In their separate remarks, the former president of Nigeria, Chief Olusegun Obasanjo, Ogun State Governor, Prince Dapo Abiodun, and Senator Ishiaku Abo, from Adamawa, described Rev. Dr. Ayokunle as an indefatigable leader of the Church and a blessing to the country.