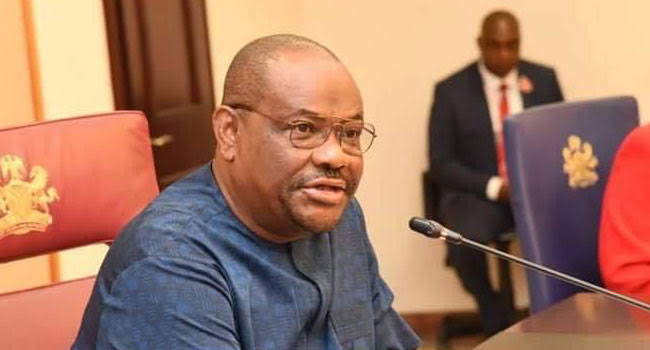 Rivers State Security Council has imposed a dusk-to- dawn curfew on the entire 23 Local Government Areas of the state with effect from Thursday.
Governor Nyesom Ezenwo Wike, in a statewide broadcast said the decision to impose the dusk-to-dawn curfew  was taken after an exhaustive deliberation by the State Security Council at the Government House, Port Harcourt on Thursday.

The governor recalled that on the  28th of April 2021, the State Security Council, in consideration of the recent murderous attacks on security personnel in Ikwerre and Abua/Odual Local Government Areas had imposed a night time curfew on all entry and exit points with Abia, Akwa Ibom, Bayelsa and Imo States.

But, after a review of the present security situation, the governor said there were  possibilities of further deadly attacks on hard and soft targets across the state.

And to this end, he said it had become imperative for the State Government to take further necessary measures to secure the state and safeguard lives and property.

“Accordingly, the State Security Council has, today, after exhaustive deliberation, decided and advised that a state wide curfew on human and vehicular movements be imposed as part of additional measures to prevent the faceless criminals from unleashing their deadly actions.

“Consequently, a night curfew is hereby imposed on the entire 23 Local Government Areas of the State prohibiting any human and or vehicular movement within or any part of the State from 10.00 p.m. to 6.00 a.m. from today 29th April 2021 until further notice.”
Wike emphasised that in taking those and other drastic measures, the state government’s singular intention was  to secure the  state and guarantee the protection of lives and property.

The governor urged everyone in the state to be vigilant and promptly report every suspicious movement in their neighbourhood to the security agencies for immediate actions.