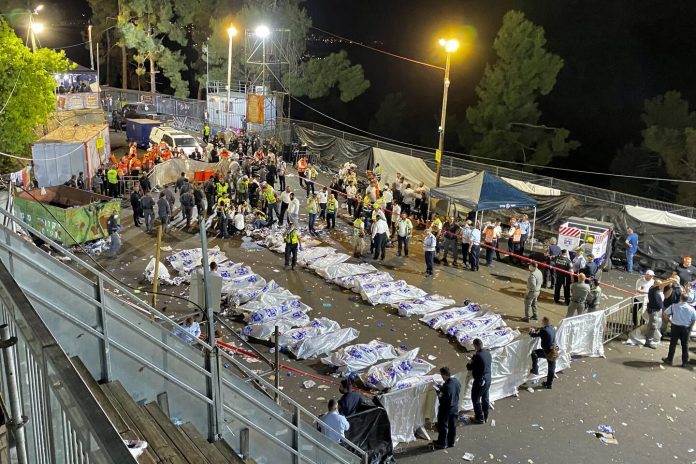 At least 44 people have been killed and about 150 injured in a crowd crush at a Jewish religious gathering in northern Israel attended by tens of thousands of people.

The Guardian reports that children were among the dead, Eli Beer, the director of an Israeli volunteer ambulance service, Hatzalah, said, “Unfortunately, we found small children trampled there, and we performed CPR. We were able to save some of them,” he told Army Radio.

The national ambulance service, Magen David Adom, said the injured had been rushed to hospitals around the country. Six people were in a critical condition and 18 in a serious condition.

The crowds at Mount Meron were estimated at about 100,000. Permission had been given for 10,000 people to attend the largest event held in Israel since the start of the Covid pandemic last year.

The cause of the crush was not confirmed but witnesses said people were asphyxiated or trampled in a narrow passageway while trying to exit. Footage from the night showed men frantically pulling down corrugated iron walls to escape. Children were separated from their parents in the confusion.

A 24-year-old man, identified only by his first name, Dvir, told Army Radio “masses of people were pushed into the same corner and a vortex was created”. He said a first line of people fell down, and then a second, where he was standing, also began to fall down from the pressure of the crush.

In one video, a crowd of men could be seen being funnelled through a narrow walkway, with some falling and one man appearing to wave for help. Another video showed a crush at a barricade.

Local media reported police might have unknowingly exacerbated the situation by blocking the rushing crowds from dispersing, unaware of the squeeze further back.

The commander of the area’s northern district, who oversaw the security arrangements, said the cause of the disaster was still unclear but he held overall responsibility. “For better or worse, and [I] am ready for any investigation,” Shimon Lavi told reporters.

Update from the incident in Meron: 36 injured lightly, 3 moderate, 10 critically, and dozens killed. MDA is providing assistance and evacuating the injured at the scene. pic.twitter.com/7vRyZPJ3U1

The Israeli military said it had dispatched medics and search and rescue teams along with helicopters to assist with a “mass casualty incident” in the area.

Israeli media published an image of a row of bodies covered in plastic bags on the ground and videos posted on social media showed chaotic scenes.

Yehuda Gottleib, one of the first responders from United Hatzalah emergency services, said he saw “dozens of people fall on top of one another … A large number of them were crushed and lost consciousness.”

“I thought I was going to die,” another witness told the newspaper Maariv. “I saw people dead next to me.”

Witnesses said they only realised people had been asphyxiated when an organiser appealed over a loudhailer for the crowd to disperse.

“We thought maybe there was a [bomb] alert over a suspicious package. No one imagined that this could happen here. Rejoicing became mourning, a great light became a deep darkness,” a pilgrim who gave his name as Yitzhak told Channel 12 TV.

Motti Bukchin, a spokesman for the Zaka ambulance service, said families were being notified and the bodies were being taken to a single location for identification. He said he expected burials to begin before sundown of the Jewish Sabbath, when funerals do not take place.

The event appeared to be one of the worst peacetime tragedies in Israel’s history, with the death toll similar to the number of people killed in a 2010 forest fire.

The prime minister, Benjamin Netanyahu, said it was a “great tragedy”. He added: “We are all praying for the recovery of the injured. I ask to strengthen the rescue forces operating in the area.”

Reuven Rivlin, the Israeli president, tweeted: “With great anxiety, I follow the reports from Meron and pray for the healing of the wounded.”