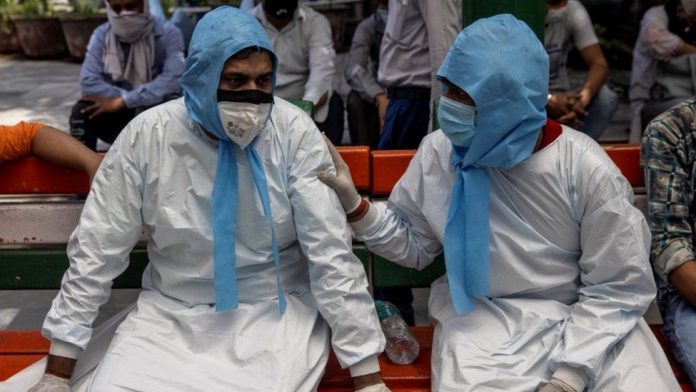 Indians have resorted to seeking help from witch doctors amid a surge in cases of COVID-19 in the country.

The country recently hit about 380,000 cases a day on average, with no vaccines available to even stave off the worsening situation.

Medics have now said that the infection has spread from cities to rural areas that lack modern healthcare facilities.

As such, people have begun turning to witch doctors for remedies.

While cities such as Delhi and Mumbai were early epicentres of infection, the virus has now spread to more rural areas, causing havoc as medics say people are turning to witch doctors to help them.

Dr Ashita Singh, a medical doctor in Mumbai, has said she sees increasing numbers of patients arriving with branding marks given to them by witch doctors to drive out ‘spirits’ they believe caused the infection.

“We have a lot of patients who are on our wards right now who have marks on their abdomen because they first went to the witch doctor who gave them hot iron branding in the hope that the evil spirit that is supposed to be causing this illness will be exorcised.

“[The witch doctor] is their first port of call. Only a small proportion will come to the hospital. Most will go to the witch doctor or the indigenous practitioner, who will give them herbal medication for their illnesses.

“A lot of time is wasted, and people come in very late and very sick, and a lot of them never come to the hospital, so what we see in the hospital is really just the tip of the iceberg,” she said.

Cities and states have moved to impose new lockdown measures as the crisis worsens.

However, there has been no announcement of another nationwide lockdown from the nation’s Prime Minister, Narendra Modi.

On Thursday, Health Minister of Delhi, Satyendar Jain, said that there are currently no more vaccines left.

The minister also failed to give any timeline for when the vaccines would be ready.