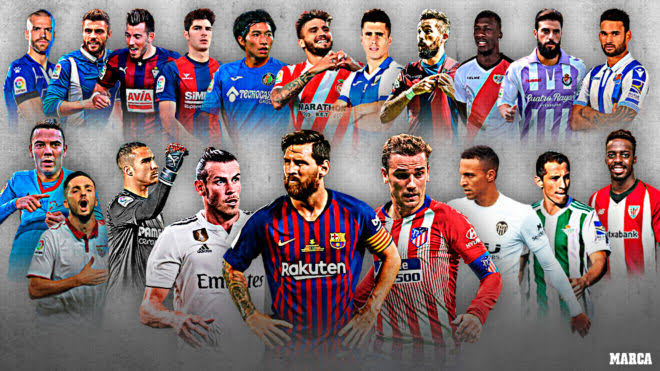 Among the title races in the top-flight leagues in Europe, none has reached a scintillating crescendo like La Liga. As the league table currently stands, any of the top four teams in the Spanish first division — Athletico, Real Madrid, Barcelona, and Sevilla — can win the title this season.

Sevilla has also won five of their last five games to join the four-horse race, being just one point below third-placed Barcelona.

Now, here are the odds that all four teams need to beat to secure Spain’s highest club honour for their trophy cabinets.

Athletico Madrid
It is a bit needless to say that Athletico properly bottled a chance to put the league to bed earlier in the season.

As of January, Athletico had opened a seven-point gap between themselves and the rest of the league.

However, they now need to win all their games, including a second fixture against Barcelona, to have a point advantage come game week 38.

Real Madrid
The defending champions have made a very decent title defence this season following solid performances by the club.

However, the Madrid team now has to win all their remaining games, which will be a little difficult considering that they face fellow title contenders Sevilla and a stubborn Athletic Club side who have already won silverware this year.
This is asides from the fact that Zinedine Zidane also needs to pay attention to his roster management as Madrid are still in contention for an unprecedented 14th Champions League Trophy.
The Spanish champions face Chelsea come May 5 for the second leg of their Semi-Final draw.

The score is 1-1, with Chelsea holding the advantage after scoring in the Bernabeu.

Barcelona
Barcelona failed to win their outstanding fixture against Granada on Thursday, bottling a chance to go a point clear of Athletico and three clear of arch-rivals Real Madrid.

Now, they will need a win in all five remaining games, one of which they will be facing first placed Athletico on May 8.
Not only that, they now need a bit of luck as they will be hoping for Real Madrid to drop a point within now and game week 38.
This is because Madrid and Barcelona will finish on the same points if both teams win all their subsequent matchups.

If not, Real Madrid would be crowned winners based on head to head victory counts as they beat the Catalan club in both league fixtures this season.

Sevilla
Sevilla has turned into a sleeper contender this season, as Lopetegui’s men have racked up five wins in their last five games and seven wins from their last eight.

Sevilla is now just one point behind Real Madrid and Barcelona and could be the surprise winners following a slip up from Barcelona or either Madrid.
The Seville team has Real Madrid to face in the League after Madrid’s midweek champions league matchup.
Provided the Real Madrid team are already stretched thin by injuries to major players at the club, Sevilla will hope that fatigue plays a very decisive role in helping them steal all points against Los Blancos.