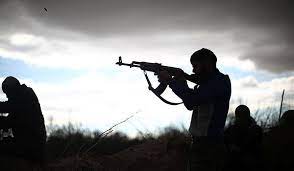 Gunmen have razed the Bende Divisional Police headquarters in another attack on Abia State.

According to reports, criminals attacked the station on Wednesday night, shooting at police officers present. However, there has been no official report on the number of supposed casualties.

Spokesperson for the Abia State Police Command, Geoffrey Ogbonna, is also yet to make an official report or response.

READ ALSO: US knocks Nigeria, others for repressing religious freedom

The Indigenous People of Biafra has been blamed for the various attacks on security outfits in the country’s South-East region as reports of attacks in the area intensified after the creation of the Eastern Security Network.

However, IPOB has not assumed responsibility for any of the attacks.