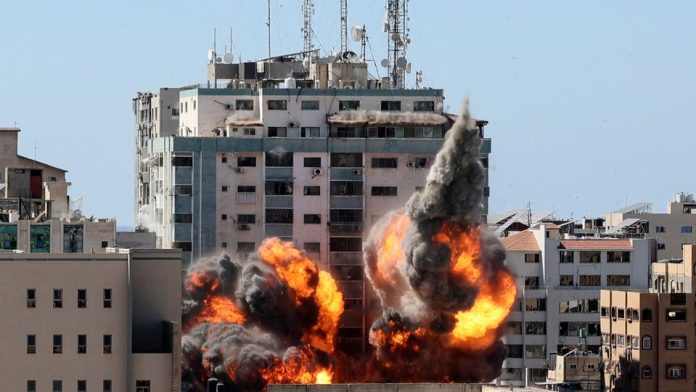 The Israeli air force has destroyed a tower block in Gaza City housing the offices of the Associated Press and Al Jazeera in what has widely been decried as an attack on press freedom.

The Guardian reports that the airstrikes on Saturday – the sixth consecutive day of hostilities between Israel and Hamas – came roughly an hour after the Israeli military ordered people to evacuate al Jalaa tower.

There was no immediate explanation beforehand for why the 15-storey building was targeted. As well as the two international media organisations, the high-rise was home to several other media outlets, offices including several internet providers, and private apartments.

The building was hit approximately six times before collapsing in plumes of black smoke, which engulfed the entire neighbourhood.

Al Jazeera broadcasted live a phone call between the building’s owner, Abu Husam, and an Israeli intelligence officer in which Husam asks the officer to give the media personnel time to evacuate equipment from their offices. His request was denied.

A statement from the Israel Defence Forces said the building had contained military assets belonging to the intelligence offices of Hamas.
“Prior to the strike, the IDF provided advance warning to civilians in the building and allowed sufficient time for them to evacuate the site,” the IDF statement said.

“We ran down the stairs from the 11th floor and now looking at the building from afar, praying Israeli army would eventually retract,” an AP reporter, Fares Akram, tweeted just before the tower was hit.

Earlier on Saturday, Akram published a first-person piece in which he described how an Israeli bomb had destroyed his family’s farm in the northern Gaza Strip the day before. Six of his relatives, including his father, three friends and several colleagues have died in the three wars and other hostilities between Israel and Hamas, he wrote.

“The Associated Press office is the only place in Gaza City I feel somewhat safe. The Israeli military has the coordinates of the high-rise, so it’s less likely a bomb will bring it crashing down.

“But on a deeper level, it’s speaking to people in Gaza, working to get their voices out of a territory they themselves cannot leave, that keeps me sane. When I tell the world what’s happening here, I find some small solace.”
The current hostilities between militants in the Gaza Strip and Israel are the worst clashes since the 2014 war. Several reports, citing Egyptian mediation sources, said that on Thursday night Israel rejected a ceasefire proposal that Hamas, the Islamic group which controls the area, had agreed to.
Since Monday night, Hamas has fired hundreds of rockets into Israel, which has pounded the Gaza Strip with strikes. In Gaza, at least 139 people have been killed, including 39 children and 22 women; in Israel, seven people have been killed, including a six-year-old boy and a soldier.