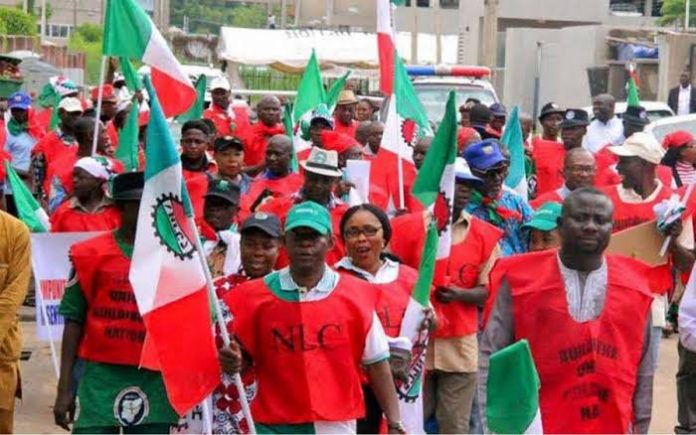 The Nigerian Labour Congress and its affiliate unions will on Monday embark on a five-day warning strike over the recent disengagement of civil servants by the Kaduna State Government.

El-Rufai said a significant amount of the statutory federal allocations to the state was being spent on the wages of public servants.

But the NLC has vowed to resist the action of the state government, accusing the governor of not being sensitive to the plight of the workers.

Speaking in Kaduna on Sunday, the NLC Chairman in the state, Ayuba Suleiman, disclosed that the industrial action will be accompanied by a peaceful protest which will be led by the President of the Union, Ayuba Wabba, and other labour leaders across the country.

He explained that the strike, which will involve grounding of all socio-economic activities in both public and private sectors in a bid to force the Kaduna State Government to reverse the sack of over 7,000 local government workers and teachers and also suspend its plan to sack another 11,000 civil servants any moment from now.

He said, “We are very much ready for the industrial action on Monday and it is going to be a dual activity. We are embarking on the withdrawal of activities and equally going to stage a peaceful protest come Monday to press home our demand, grievances to the state government.

“I want to assure you that this industrial action is going to be under the care of our amiable President, Comrade Ayuba Wabba. We have had a series of meetings today, we met with various stakeholders including all sectors of the economy in the state towards the success of this industrial action.

“In total, you have about 7,700 workers that are disengaged at the local government level. As I am talking to you, over 11,000 workers of the state civil service are pencilled for disengagement. That is why in April, because of their intention, over 20,000 workers have not yet received their April salary.”

But reacting, the Kaduna State Government defended its decision, saying it is in the interest of over 10 million citizens of the state.

Commissioner for Local Government, Jafaru Sani, said not even the threat of industrial action or blackmail by the union will make the state government reverse its decision.

He also debunked the claims of the labour union that the government has pencilled down over 11,000 workers for disengagement, adding that there are plans to right-size its public service, but, however, did give the figures.

The commissioner explained that the government’s decision to lay off some workers and political appointees is necessary to enable it cope with fiscal challenges and preserve its ability to use its resources for the entire state.

He also denied the allegations of anti-labour activities, stressing that Kaduna State workers have been receiving the new minimum wage since 2019.

The commissioner said, “This government has reiterated its commitment to the welfare of its workers. It insists that this is sustainable only in the context of the general welfare of residents of the state that the government is mandated to serve.

“It is not sustainable to persist in spending 84 to 96 per cent of the FAAC received on salaries and personnel cost as has been the experience of the state since October 2020.”