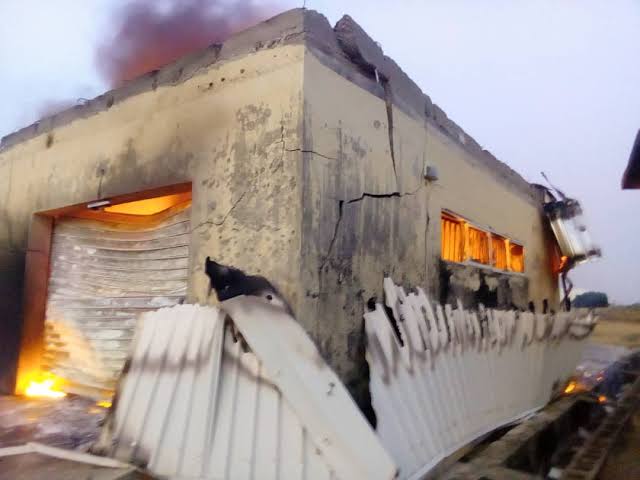 By Henry Okonkwo
The headquarters of the Independent National Electoral Commission in Enugu State was on Sunday night set ablaze.
The office located around Independence Layout was said to have been targeted by arsonists at about 8:30pm.
This occurred barely one week after another INEC office in Obollo-Afor, Udenu, Enugu State, was also burnt down.
INEC officials said no casualties were recorded but the incident led to the destruction of electoral materials and equipment, which inadvertently means loss of millions of taxpayers’ funds.
Commissioner of Police in the state, Mohammed Aliyu, in a statement by spokesperson for the command, Daniel Ndukwe, has ordered the deployment of security personnel within the area and an investigation into the incident.
The statement read, “Yet to be identified armed miscreants on, 16/05/2021 at about 2030hrs, attempted to set the Enugu Headquarters of the Independence National Electoral Commission ablaze but were stiffly resisted by joint security operatives, who swiftly mobilised to the scene.
“The state fire service personnel, who promptly responded to calls put across to them, helped in quenching fire already set on four vehicles and two cushions within the office premises.
READ ALSO: Insecurity: New security outfit launched in South-East
“Meanwhile, the Commissioner of Police, CP Mohammed Ndatsu Aliyu, who immediately raced to the scene alongside heads of other security agencies in the state, has ordered the placement of adequate security within the precincts of the office and the launch of a full-scale investigation to unravel the mystery behind the act as well as fish out the assailants.
“He enjoins law-abiding citizens of the state to remain vigilant and promptly volunteer useful information that will help the police in the investigation.”