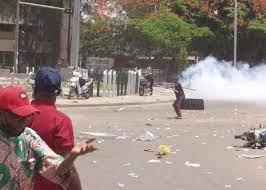 Armed thugs attacked labour union members during their protests in Kaduna on Tuesday.

The Nigeria Labour Congress members declared a strike on Monday to protest what has been deemed as poor worker treatment from the Kaduna State Government. The situation boiled over when a report of a mass-layoff of government workers in the state surfaced last week.

According to eyewitnesses, the police and other security agents dispersed hoodlums, who were armed with knives, sticks and stones as they attacked the peaceful protesters.

NAN reports that some of the thugs have been arrested.

One protester, who was on ground when the thugs attacked, said that the armed hoodlums threw stones at them and attempted to use knives as well before security forces intervened.

“We were at NEPA roundabout and about to be addressed by our chairman when the heavily armed thugs in their numbers arrived and began to wield knives and sticks while others throw stones at us.

“We were lucky security personnel were with us, who engaged the thugs and manage to disperse them and arrest some of them,” he said.