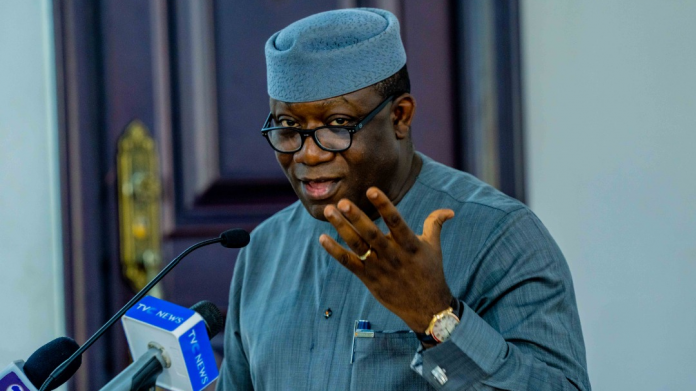 The CBN-ABP, according to the Governor, will  generate no fewer than 12,000 jobs for rice farmers, who, would in turn, create additional 50,000 jobs in full production across the rice value chain within a year.

Fayemi, who gave the assurance on Tuesday during the official launch of Ekiti Rice Pyramid Project and flag- off of the 2021 Wet Season rice cultivation in Ado -Ekiti, said his administration keyed into the CBN-ABP in demonstration of his quest to diversify the economy and maximize the potential of agriculture in the state.

He highlighted some of the achievements of his administration in attracting investors to the agricultural sector to include the resuscitation of the 40 years moribund Ikun dairy farm with potential of $5million investment and 10,000 litres daily production of milk ,inauguration  of Farmkonnect, the largest snail farm with an annual production of 3.6 million snails with slime extraction at Egbeja Snail Village, Okemesi and others.

He said, “As a government, our simple pledge is to institutionalize commercial agriculture and make agribusiness enticing, exciting and encouraging for the populace, especially the youths. That is why we started our Youth in Commercial Agriculture Development (YCARD) programme which now has over 1000 young farmers.

“Without doubt, Ekiti State is making this solemn pledge a reality today with this tripartite partnership between CBN ANCHOR BORROWERS FUNDS, RIFAN (Rice Farmers Association of Nigeria) and Ekiti State Government. This is the commencement of the programme in the South-West and I am glad that my brother Governors – Akeredolu and Oyetola are here to honour us with their presence. It is my expectation that Ondo and Osun States will be the next destinations for this tripartite partnership.”

Fayemi who inspected some of the farm inputs displayed at the venue, commended President Muhammadu Buhari for demonstrating relentless commitment to transforming the agricultural sector in enhancing food production and food security in the country.

“This ease of production of rice -the most valued staple in Nigeria- has been successfully practised and celebrated in some states like Kebbi, Jigawa, Sokoto, Niger, Kwara, Ebonyi etc. It is gratifying that today, Ekiti State is now joining the train as a participant in the Anchor Borrowers Programme of the CBN, in partnership with the National body of Rice Farmers Association of Nigeria led by Alhaji Goronyo,” he said.

Earlier in his speech, CBN Governor, Emefiele expressed the commitment of the apex bank to supporting the state governors in their drive to expand agricultural institutions  adding that close to 700 billion naira had  been disbursed under the CBN-ABP to farmers across the country with focus on over 21 crops.

Emefiele said the massive rice pyramids being launched in the state were harvested from various fields across the states and neighbouring states owned by rice farmers under the ABP and also serve as a confirmation to the success of the programme.

The CBN governor who  stated that the apex bank had made significant investments in all the states of the federation, added that aside support for massive rice cultivation, the bank had also partnered with states on palm, cocoa and  cassava.

He said the bank would like to see more Nigerian youth embrace mechanised farming as a sure way to becoming  millionaires, saying that the CBN would readily assist.

The CBN Governor who lauded the Ekiti State Government’s partnership with Promasidor in the resuscitation of the Ikun Dairy Farm billed to commence production of 10,000 litres of milk per day, said the project got the support of the bank to the tune of $5 million.

The Governors of Ondo, Osun, Kebbi, Jigawa who spoke at the event commended Fayemi for taking the lead to set in motion the massive production of rice in the South-West adding that it would reposition Ekiti to its rightful place as the centre of rice production in the region.