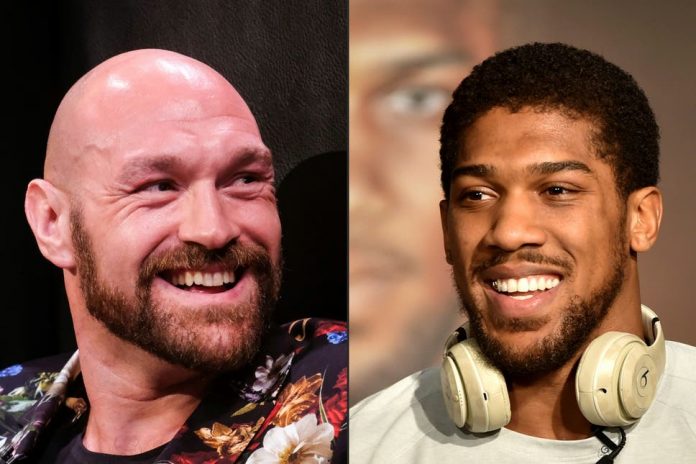 Anthony Joshua has made jest of Tyson Fury after jokingly claiming he plans to set up a GoFundMe page to give Deontay Wilder $20million of step-aside money so his superfight with the Gypsy King can take place.
Mirror.co.uk reports that It will be a year in June since it was first claimed that the heavyweight unification fight between Joshua and Fury had been agreed..

But fans are still waiting for one of the biggest fights in British boxing history to take place and now there are serious doubts whether the pair will meet next.

After months of claims that the deal was ‘done’ and that almost everything had been agreed, the proposed fight was dealt a devastating blow on Monday when a US judge ruled in mediation that Wilder had a right to face Fury for a third time before September 15.

The American former heavyweight champion of the world has long claimed he had a contractual right to take on WBC belt holder Fury for the third time, following the Manchester fighter’s seventh-round knockout win in February 2020.

The pair had been due to meet again in July last year but the Coronavirus pandemic forced a cancellation and Wilder wanted the bout switched to this year.

But by that point, Fury’s team, which includes legendary promoter Bob Arum, and Joshua’s promoter Eddie Hearn had turned all their focus on a superfight which would have seen the victor become the first undisputed heavyweight champion of the world since Lennox Lewis in 2000.

As recently as Sunday, Fury had claimed the fight in Saudi Arabia on August 14 was definitely going ahead after a call with Saudi defense secretary Prince Khalid Abdulaziz Al Saud.