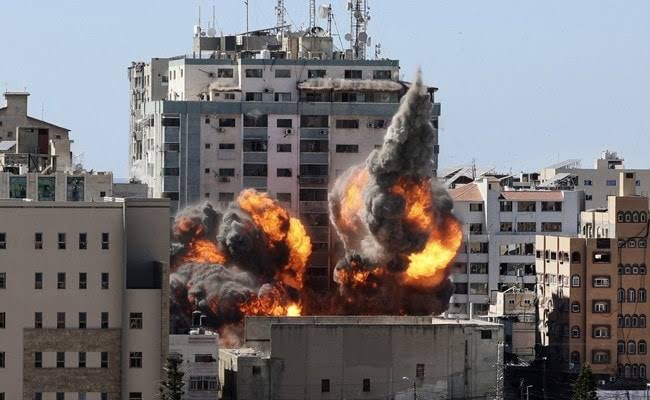 Israeli fighter jets continued to pummel the Gaza Strip in the early hours of Wednesday, flattening residential buildings and killing at least four Palestinians, including a journalist, Al Jazeera reports.

The latest raids came as Palestinian groups launched more rockets towards cities in southern Israel. There were no immediate reports of injuries.
Earlier, Israeli forces shot dead four other Palestinians and wounded scores more during protests and a historic general strike in the occupied West Bank and East Jerusalem.
At least 219 Palestinians, including 63 children, have been killed in Gaza since the latest violence flared on May 10. About 1,500 Palestinians have been wounded.
Twelve people in Israel have died, including two children, while at least 300 Israelis have been wounded.
Despite the escalating violence – now in its tenth day – diplomatic efforts for a ceasefire between Israel and Gaza’s Hamas rulers have failed to make much headway.
The United States continued to block the UN Security Council from issuing a joint statement urging an end to the hostilities, telling diplomats that a public statement would not help calm the tensions.
France, however, says it is working with Israel’s neighbours, Egypt and Jordan, on a new ceasefire resolution. China said it was “supportive” of the French proposal.
Here are the latest updates:
Sirens sounded in the southern Israeli city of Ashdod and Ashkelon, and in the central city of Rehvot due to a round of rockets launched from Gaza, Israeli media reported.
At least 333 wounded in Israel received medical treatment since violence flared on May 10, the Israeli Magen David Adom emergency service said on social media.