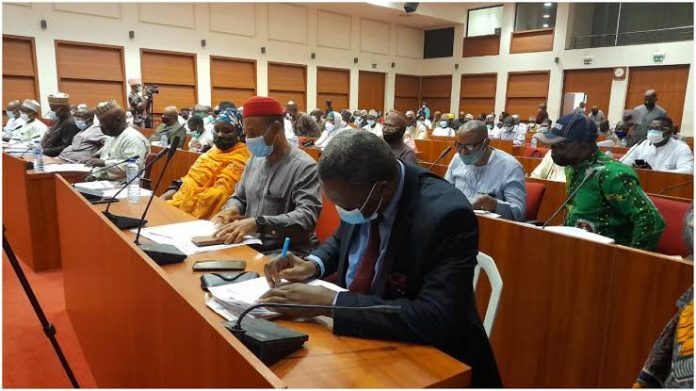 The Senate Committee on Interior says creation of more job opportunities for the teeming unemployed is key to tackling insecurity in Nigeria.

The Chairman of the Committee, Sen. Kashim Shettima, stated this on Thursday in Abuja when he led members of the committee on an oversight visit to the Ministry of Interior.

“Unemployment cannot be addressed squarely from the security angle. We need to create jobs, especially in the area of agriculture, industry and most especially invest in education.

“Knowledge is key, we have to invest in education, “he said.

Shettima, who addressed newsmen after a closed-door session with the ministry’s Permanent Secretary, Mr Shuaib Belgore,  and other directors, said the team was given an elaborate submission on the ministry’s activities.

He said the team was quite impressed with the submission.

“Our discussion revolves around the general climate of insecurity and what measures the ministry is taking to address some of the issues propping up in the polity.

“Security is everybody’s business, we all have a stake to secure the lives and property of the citizenry,” Shettima said.

The permanent secretary represented the Minister of Interior, Mr Rauf Aregbesola, during the visit.

He said that the ministry was faced with challenges of funding and non-release of full capital budgetary appropriation for its projects and programmes.

“Over the years, the ministry has been inadequately funded to finance its capital projects and other programmes of the ministry.

“For instance, in the year 2020, the ministry’s capital budget was reduced by 29.17 per cent, while in year 2021 budget, there was by far less than the proposal submitted to the National Assembly at a whopping 53.21 per cent.”

He, however, said that in its effort to provide internal security and promote citizen integrity, the ministry welcomed collaboration from Nigerians.

“Indeed. in an increasingly globalised world, security threats often cut across nations and their resolution calls for concerted efforts at the bilateral and multilateral levels.

He further said that the key achievements of the ministry included migration from manual to e-base process of temporary work permit, ongoing new visa regime to biometric visa and Introduction of Nigeria Internal Security and Public Safety Alert System (NIPSAS).

While at the headquarters of the Nigeria Immigration Service (NIS), Shettima lauded the developmental strides of the Comptroller-General, Muhammad Babandede.

“Honestly, we have not done justice to you if we do not publicly acknowledge your effort, you are a transformational leader.

“This structure was constructed by Julius Berger, words cannot convey our depth of gratitude to you for your exemplary leadership, indeed prosperity will judge you very highly.”

Responding, Babandede said that the NIS had evolved into a modern, efficient and a technological-based agency.