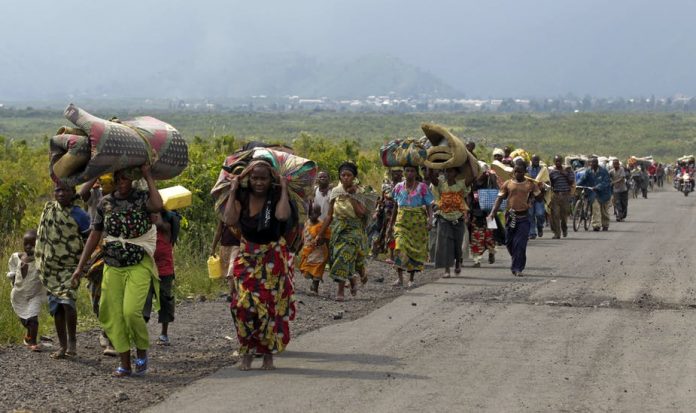 As part of its efforts to provide humanitarian assistance in the North- East, the International Organisation for Migration (IOM) on Thursday, launched a Multipurpose Community Hall in Yola, Adamawa State.

The hall which is funded by the government of Korea, in collaboration with the IOM, the World Food Programme, as well as the Adamawa State Government, is to serve as a Skills acquisition centre.

The News Agency of Nigeria (NAN) reports that the hall, inaugurated by the Adamawa State Governor, Ahmadu Fintiri, was part of a two million dollar funding provided to the IOM by the Korean government for humanitarian assistance.

Speaking at the inauguration, IOM Chief of Mission, Franz Celestin said that it would also serve as a center to provide support and empowerment to survivors of sexually based violence.

According to him, the move by the IOM was to provide a hand up to the beneficiaries, so that they could find their feet and push towards life beyond humanitarian aid.

“This hall was built with the purpose of providing a safe space for those who have been displaced and also for those in the community who need assistance.

“They are invited to come, not only for the day to just relax, but to also learn a skill to move on with their lives.

“This hall complements all of the activities that we have been doing to fully operationalize humanitarian development and businesses.

“This gives a space for women, especially those who have been victims of violence, to chart their own course and put forward the steps in the right direction for a better life.

“It will empower women in the community to see a life beyond humanitarian aid. What we are doing here is giving them a hand up to allow them step forward,” he said.

Giving insights into some of the skills to be acquired, Celestine said that the centre had been equipped with sewing machines to teach tailoring, fish pens for fish farming, as well as a vegetable garden.

He said that the proceeds from the enterprises at the centre would be used to sustain it and pay participants, while the IOM works at scaling up the intervention.

“The scope is going to reach as many people as possible, we are just testing it to see how many people we can accommodate and we are going to cascade it to reach even more people.

“Now we have more than 100 sewing machines, there is a fish bond in there where they will learn horticulture and raising fish, which they can sell.

There is a vegetable garden on campus and not only would it feed the kitchen, what is left would be sold and the funds will self-sustain it.

On why it was sited in Adamawa and not Borno, he said that IOM chose the state because of the relative security and protection of investment.

He stressed that one would not want to build such an edifice in a crisis-prone area, where insurgents could easily attack and burn it down in a couple of months, hence the choice of Yola.

Commissioning the centre, Gov. Ahmadu Fintiri of Adamawa commended the Korean government and the IOM for the initiative which, he described as laudable.

Fintiri, who was represented by the Deputy Governor, Martins Babale, said that considering the limitation of funds, such a huge investment by the Korean government must be commended.

He assured that the state government would ensure the sustenance and good utilization of the centre for the purpose for which it was built.

The governor, however, urged the government of Korea and other international organisations to expand their interventions in the state.

For the government of Korea, he requested them to consider indigenes of the state in its sponsored postgraduate programmes, saying that the state would also need assistance in the area of technology.

On his part, the Korean Ambassador to Nigeria, Kim Young-Chae said that the intervention by his government was in the light of the cordial relations between the two countries.

He pointed out that Nigeria was indeed blessed, but stressed that insecurity and lack of peace was foiling the ability of the country to harness its potentials.

The ambassador stressed that he was not oblivious of the challenges faced by Internally Displace Persons in the North East, pointing out that the interventions by the Korean government were viewed in that light.

“We are aware of the difficulties faced by IDPs and that is why the Korean government provided funding to build this multipurpose hall.

“We are very happy. This is a joint corporation between many institutions: the Nigerian government, Adamawa state government, the World Food Programme and the IOM.

”I am happy that my government is part of this joint effort and this project that costs around one million U.S. dollars,” he said. (NAN)