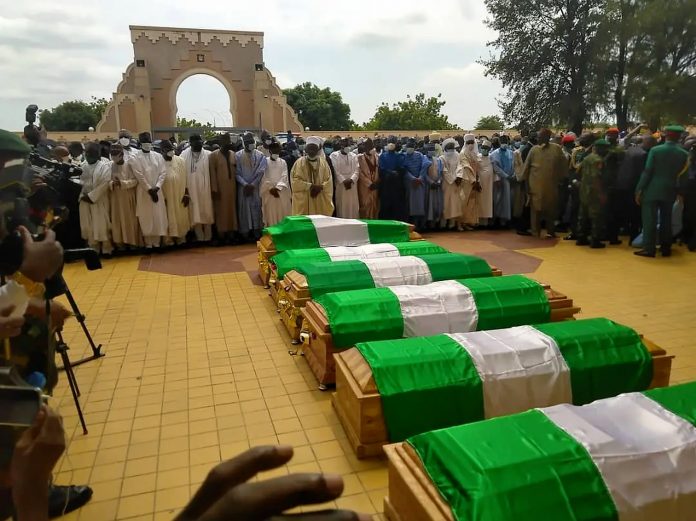 The remains of the late Chief of Army Staff, Lt.-Gen. Ibrahim Attahiru and 10 others involved in the ill-fated NAF aircraft on Friday in Kaduna had  earlier arrived in Abuja for burial.

Those taken to the mosque with Attahiru are his Chief of Staff, Brig.-Gen. Idris Abdulkadir, Chief of Military Intelligence, Brig.-Gen. Abdulrahman Kuliya and Aide De camp to COAS, Maj. L.A Hayat.

Others are the Finance Officer, Maj. A. Hamza and the Orderly to COAS, Sgt. Saidu Umar.

While the remains of the Provost Marshal (Army), Brig.-Gen. O.L Olayinka and crew members, Flt.-Lt. T.O Osaniyi, Flt.-Lt. A.A Olufade, Sgt. Adesina and ACM Oyedepo were taken to the church for funeral.

All the bodies will be moved to the Military Cemetery along Airport road for interment after the funeral services at the mosque and church.

The bodies arrived Nnamdi Azikiwe International Airport at about 10:50 a.m. before the movement to the mosque and the church.

The funeral service for the late Beach Craft crew has just concluded as the pull bearers move the coffins out of the chapel for onward movement to the National military cemetery. pic.twitter.com/jmNUTWptNp