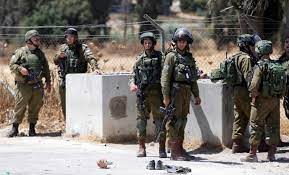 An Israeli soldier was left with a kitchen knife wedged in his back after a Palestinian attacker stabbed two people in Jerusalem on Monday before the assailant was shot dead by police.

The attack came in the tense aftermath of an 11-day war between Israel and Gaza’s militant Hamas rulers that was triggered by protests and clashes in Jerusalem.

A civilian was also stabbed in the incident which police described as a terrorist attack.

Police did not provide any details about the attacker but referred to him as a ‘terrorist,’ a term usually reserved for Palestinian assailants.

The Magen David Adom emergency service said it treated two men in their early 20s with stab wounds to their upper bodies.

The military identified one of those wounded as a soldier.

Both are being treated at Hadassah University Hospital.

Video posted on social media showed the soldier, wearing an Israeli air force uniform, with a knife lodged in his back as he knelt on the ground and received treatment from medics.

Police said in a statement, “Around 1:30pm, an assailant arrived at the light rail station, pulled out a knife and used it to injure two people there.

“Officers who were on the scene responded quickly, shooting the assailant and neutralising him.”

Public Security Minister Amir Ohana said the officers who shot the assailant “acted quickly and resolutely, while striving for accuracy”.

The incident occurred near the neighbourhood of Sheikh Jarrah, where the potential evictions of Palestinian families drew mass protests and helped spark 11 days of fighting between Israel and Gaza militants.

An Egyptian-mediated ceasefire between Israel and Hamas held into a fourth day on Monday.