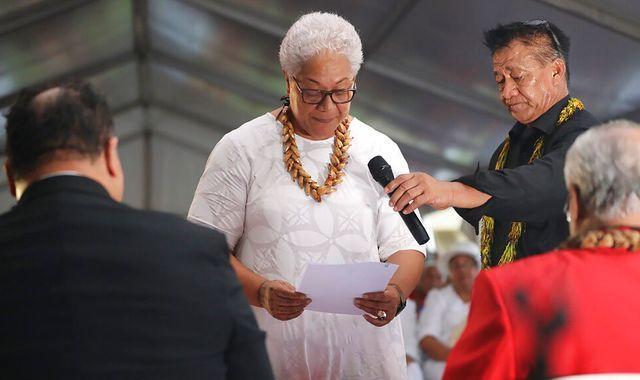 Samoa’s first female Prime Minister has been sworn into office during an extraordinary makeshift tent ceremony.

Fiame Naomi Mata’afa became the nation’s leader on Monday after the islands’ long-serving ruler refused to cede power and locked the doors of parliament.

The ad-hoc swearing-in is sure to face a legal challenge and will only deepen a severe political crisis in the South Pacific nation following a contested April 9 election.

Prime Minister of 22 years, Tuilaepa Sailele Malielegaoi, lost that vote but has so far refused to step aside, prompting allegations of a constitutional coup.

Mata’afa arrived for a sitting of parliament early Monday accompanied by judges in formal robes and horsehair wigs and expecting to be sworn in.

Instead, the group was barred from entering the chamber, which was locked by officials allied with the long-ruling PM.

The 64-year-old Mata’afa and elected members of her FAST Party instead huddled in an open-sided marquee on parliament’s gardens, as supporters sang and fanned themselves in the Pacific heat and police looked on.

Hours later there were raucous scenes as Mata’afa’s cabinet was sworn in one-by-one in a ceremony that had all the trappings of officialdom but which was quickly rejected by rivals.

The loudest cheer was reserved for the leader herself who raised her hands in triumph in the light of the setting sun.

“Democracy must prevail, always. There can be no exceptions from this fundamental principle,” a party statement said.

“Those who claim otherwise and act accordingly play with fire,” it added.

After the ceremony veteran leader Malielegaoi continued to insist he remained prime minister, despite the courts backing Mata’afa’s claim, setting the stage for continued political struggle.

He described the swearing in ceremony as ‘illegal and unlawful’.