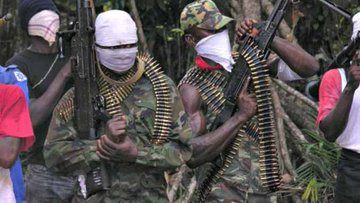 The armed men were said to have invaded the village on Sunday night and shot sporadically in the area.

Spokesperson for the police in the area, Gabriel Ubah, confirmed the incident in a statement.

He said, “On Sunday 23/05/2021 at about 2000hrs, the command received a distress call that yet to be identified gunmen came out suddenly from a nearby bush, invaded Dong Village, Jos South LGA and killed seven persons.

“A combined team of Policemen, STF, Vigilante operatives led by the Deputy Commissioner of Police, Department of Operation, raced swiftly to the scene but the hoodlums had already fled back into the bush.

“Investigation is ongoing, frantic effort is on to arrest the fleeing suspects.”