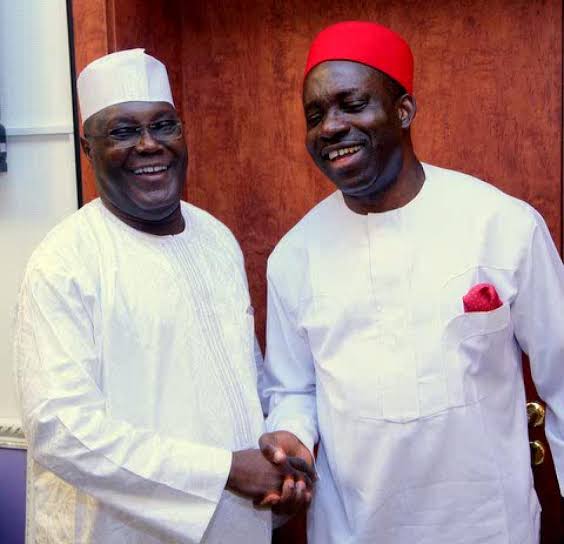 Atiku/Soludo Support Group has been launched in Abuja, ahead of the 2023 presidential election.

The group is rooting for a former Vice President, Atiku Abubakar, of the Peoples Democratic Party and a former governor of Central Bank of Nigeria, Charles Soludo of the All Progressives Grand Alliance as president and vice president respectively.

Addressing the crowd during the unveiling ceremony on Monday in Abuja, leader of the support group under the aegis of APGA Movement for a United Nigeria, Andy Ekwe, said the Atiku/Soludo joint ticket had become imperative if Nigeria must come out of its “current rudderlessness, political doldrums, state of manifest insecurity and uncertainty”.

He said, “We have the honour to unveil the takeoff of the Atiku/Soludo unity campaign team.

“Our struggle is to see that APGA gives ticket to Soludo to put him in a position to be vice presidential candidate to Atiku Abubakar come 2023 in a historic PDP/APGA alliance that will surpass the 1999 AD/APP alliance which will now chase the APC out of office.

“Fellow countrymen, there must be conscious efforts from both ends of the divide to unite our country as Nigeria cannot fathom a civil war in the 21 century and that will not favour any person or group.

“This great alliance will give all and sundry a true sense of belonging, inclusiveness, equality, respect and hope.”

But reacting, Atiku in a statement by his Special Adviser on Media, Paul Ibe, described the action as handiwork of mischief makers.

“It is obvious that this is a work of mischief.

“For the avoidance of doubt, Atiku Abubakar is of the PDP while Charles Soludo is of APGA.

“It is silly of anyone to attempt to drag the former Vice President into an election in Anambra which outcome will be determined by the people of the state.

“Atiku Abubakar is presently preoccupied with joining hands with other well-meaning Nigerians to help in finding solutions to the myriad of challenges plaguing our nation such as insecurity and economic downturn marked by joblessness and extreme poverty.

“We wish to restate that the purported 2023 campaign posters in circulation linking Atiku to Soludo are the handiwork of mischief makers and should be ignored,” he said.