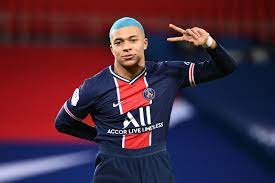 Paris Saint-Germain president, Nasser Al-Khelaifi,  has said that Kylian Mbappe will not be allowed to leave the club.
Real Madrid are interested in the PSG star, who is out of contract in 2022.
“I’ll be clear, Kylian is going to stay with PSG. We’re never going to sell him and he’ll never leave for free,” Al-Khelaifi told L’Equipe.
“I never give details to the media about ongoing negotiations. All I can say it that it’s progressing well. I hope we’ll find common ground.
“It’s Paris, it’s his country. He has a mission, not just to be a football player, but to promote Ligue 1, his country and his capital.
“He is a fantastic boy, as a person and as an athlete. He’ll win the Ballon d’Or in years to come, I’m 100% sure.

“He has everything he needs to excel here. Where can he go? Which club in terms of ambition and project can compete with PSG today?”
“If he expects guarantees on the quality of the team? If he says that he wants to win and that’s not a bad thing,” he said.
“We are ambitious too. But if he wants to decide who to recruit or not, that is not possible. I repeat, he’s a great boy, I’m sure he says that because he wants a better team to win the Champions League.”