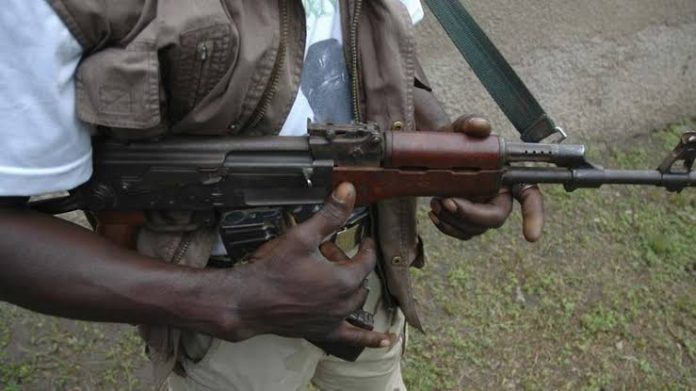 Gunmen suspected to be masterminds of the Igangan killing in Oyo State, have reportedly relocated to a village in Ogun State, where they killed three people.

The hoodlums, suspected to be killer-herders, had on Sunday morning attacked Igangan community and killed no fewer than 11 residents of the town.

It was gathered that the killers were said to have relocated from Igangan, a few kilometres away from Amule Kanji village and carried out the attack.

The victims were hunters, who engaged the marauding killer-herdsmen in an attempt to prevent them from attacking the village.

The victims were identified as Femi Bara, John Taiwo and Tunde Taiwo.

It was gathered that the victims, who were on a motorcycle, were coming from Ologede Village and ran into the killer-herdsmen.

A community leader, Ganiu Akinleye, said the gunmen struck around 11:00pm on Sunday.

Akinleye, the Balogun of Imeko Isale, who confirmed the incident, said the police had gone to the village to evacuate the corpses.

He said, “You know there was a crisis in Igangan yesterday. Those herdsmen who escaped to Imeko through our forest reserves killed three men on Sunday night.

“The victims were riding on a motorcycle, coming from Ologede around 11 o’clock last (Sunday) night.

“They ran into these fleeing herdsmen, who killed them.

“They even took the victim’s new motorcycle away, leaving their old one behind.

“We saw empty AK-47 cartridges at the scene of the incident.

“A formal report has been made at the police station in Imeko and the police have gone there to take the bodies.

“This is getting too much. We can no longer sleep in our houses.

“The herdsmen are everywhere. Government should come to our rescue. The Amotekun operatives in Imeko are too few. We need help.”

The Balogun also said the Igangan killers had relocated to a village called Sagada in Imeko/Afon.

He said, “Those herdsmen who escaped after killing people in Igangan are now in Ogun State.

“They camp in a village called Sagada, under Oke Agbede in Ward 2.

“There is a river, (Oyan) in-between Sagada and Igangan. They are there as we speak.

“We have informed the appropriate authorities, but no positive steps have been taken so far,” the community leader said.

Spokesperson for Police command in the state, Abimbola Oyeyemi, said he could not confirm the inciden