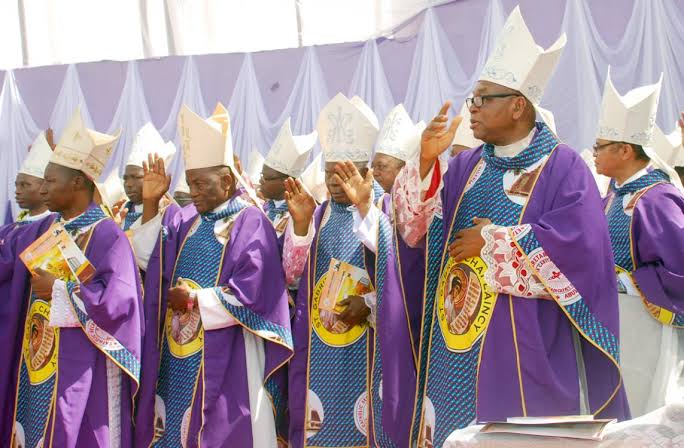 The Catholic Bishops Conference of Nigeria( CBCN), has asked the National Assembly to expunge from the 1999 Constitution all references to the  Sharia Islamic law.

The Bishops also asked the lawmakers to project the secularity of Nigeria pursuant to Sections 10 and 38 of the Constitution as no other religion is recognised by the supreme law of the country except Islam.

According to a copy of its memorandum presented to the Senate Committee on Constitution  review , the CBCN says  there must be an end to the established status that Islam enjoys in the Constitution before Nigeria can have lasting peace and unity.

The memorandum, which was co-signed by the CBCN President, Archbishop Augustine Akubeze, and the Secretary of CBCN, Bishop Camillus Umoh, maintained that the 1999 constitution was an imposition of the military, adding that it had put Christians and adherents of other religions at a disadvantage in any place with a Muslim majority.

“Complaints abound about the lack of adequate compliance with the provisions of the 1999 Constitution of the Federal Republic of Nigeria against the establishment of any state religion, respect for the freedom of religion, including the right to freely change one’s religion, and equality of all religions before the law. In particular, there have been complaints about the special bias, recognition and prominence accorded to Islam in the Constitution of this nation, Nigeria.

“The framers of the 1999 Constitution created Sharia Courts for Muslims. This explains why a Christian cannot be appointed as Kadi under the laws of the States or Grand Kadi of the Sharia Court of Appeal.

“Thus, we conclude that while Muslims exclusively have a Court that regulates their affairs and to which they can exclusively be appointed as Judges, the same cannot be said for the Christians, or people of other religions. This shows a constitutionally backed gap of inequality and under-representation in the Nigerian judiciary

“It translates to the adoption of Islam as a State religion. Of course, the enforcement of Sharia laws with public funds amounts to those states adopting Islam as a religion. We submit that adopting sharia law(s) as a State laws(s) amounts to adopting the religion founding those laws as state religion; and this violates Section 10 of the 1999 Constitution.
“To ensure peace and unity of the nation, there must be an end to the practically established status that Islam enjoys in our Constitution. We note in this regard that while Islam is mentioned very many times in the Constitution, there is not a single mention of Christianity or any other religion in the Constitution. This should be redressed.

“Consequently, we, the Catholic Bishops of Nigeria, speaking in the name of the Catholic community in Nigeria, hereby submit that Nigerians do not have one law as one people in one nation.

“To correct this, all references to Sharia and any other discriminatory or divisive law(s) should be expunged from the 1999 Constitution of the Federal Republic of Nigeria (As Amended).”