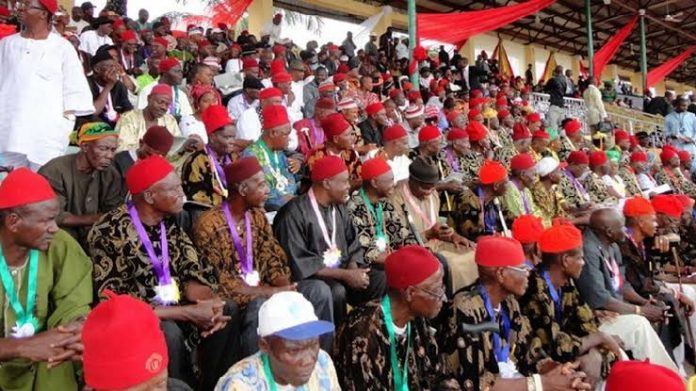 Igbo socio-cultural organisation, Ohanaeze Ndigbo, and the Association of South-East Town Union have rebuked demeaning comments that President Muhammadu Buhari made concerning the agitations of the Indigenous People of Biafra.

President Buhari had in an interview with Arise TV on Thursday described the Indigenous People of Biafra clamouring for secession as a dot in a circle, saying that the military had already been instructed to move against them.

Ohanaeze Ndigbo criticised Buhari’s statements, saying that he had a choice between dialogue or an avoidable war against the Igbo.

In a statement by its National Publicity Secretary, Alex Ogbonnia, the group said Buhari had failed to conceal a hatred for the Igbos that he has had since the region did not vote for him in 2015.

The statement partly read, “Ohanaeze Ndigbo has followed with deep concern the security sequence targeted at the Igbo; the deliberate posting of northern military and police officers at the various strategic locations in the South-East.

“Ohanaeze Ndigbo has cautioned that the unprecedented lopsidedness of the Nigerian government in favour of the Fulani, to the exclusion of other ethnic groups, especially in the security architecture, will rather exacerbate the internal security challenges in the country. History shows that leaders who espoused ethnocentric ideology, especially in Africa, had often created more problems than they intended to solve.

“Ohanaeze Ndigbo believes that the agitation by the Igbo youth over marginalisation is justified. In spite of the orchestrated alienation of the Igbo, we are committed to a diplomatic approach towards a restructured Nigeria that guarantees equity, fairness and rule of law.

“President Buhari has a choice between dialogue on the one hand and an avoidable war against the Igbo on the other. Again, history shows that our thoughts are very infinitesimal to the immutable Law of the Universe.”

Likewise, the Association of South-East Town Union after its emergency meeting in Enugu on Thursday said it was appalled by the President’s statement against Ndigbo.

National President of the group, Emeka Diwe, said the President, who had never spoken strongly against Fulani killer herdsmen, was threatening to “visit another festival of blood on the Igbo people”.

He said, “We demand that he retracts that statement, tenders an apology to Ndigbo and puts off all arrangements geared towards enforcing that genocidal threat.

“We call on the Federal Government to immediately convene a national dialogue to resolve the many fundamental questions which have continued to breed crises in Nigeria.”