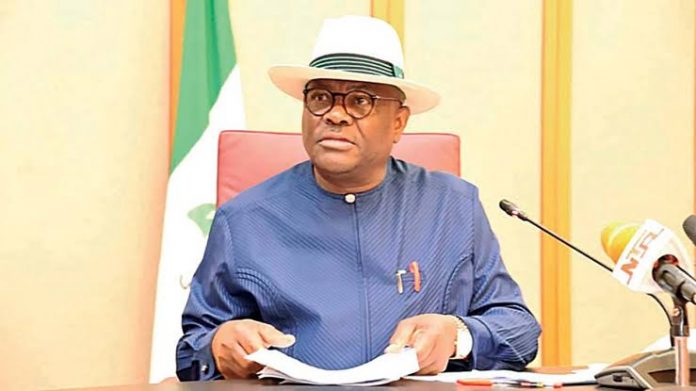 Governor of Rivers State,  Nyesom  Wike,  says any government that does not take care of the less privileged in the society is bound to fail.

The governor made the assertion while speaking on Friday at the inauguration of the Rivers State Rehabilitation Centre, Iriebe in Obio/Apkor Local Government Area.

Wike stated that his administration placed a premium on catering to the needs of people with social, psychological and other forms of disabilities and that is why an effective, caring and sober living rehabilitation home has been provided for them.
“In life, like I’ve said,  building roads alone is not enough. Building health centres alone is not enough. Building educational facilities alone is not enough.
“Any government that does not take care of the less privileged, that does not take care of those who may not have access to education and health, that government is doomed for failure.”

The governor noted that misfortune could befall some people and compel  them into  a lifestyle that is not approved by society. According to him, such persons need a well-meaning government to factor them into schemes that will provide them a future.

“They might have taken to drugs because, maybe, our own faults. Some people lack that parental care and have been lured into all kinds of vices. But we blame them.
“However, society must provide for them. Some of them may have been the best if they were in school. Some of them would have been the best if they were working. So,  you need to provide a place (Rehab)  for them. A place where they can be talked to, be counseled and eventfully come back to life (sanity).”

G Wike commended the Commissioner for Social Welfare and Rehabilitation and said he was well pleased with the success of her ministry,  particularly the edifice being inaugurated.
The governor approved a N200 million grant to the ministry that would enable it to attend to the daily requirements of the rehabilitation centre.
Performing the inauguration, the former National Assembly representative for the Niger South constituency of Niger State,  Senator Zaynab A. Kure, said  Wike was a development -minded leader.
Kure spoke of Governor Wike administration  as  a gender friendly leadership for having a female deputy and working amicable with a female while he served as a Minister of State (Education).
According to her, development is not about roads alone, but it must also address the health of the people, both young and old.
“You picked a female as a deputy. Right from the time you picked her,  nobody has heard of a friction between you and the deputy governor.
“It shows how gender friendly you are, and of course,  how passionate, and tolerant you are of the development of Rivers State ditto the whole nation.”
She further commended the governor for reviving the centre which would help the government tackle the problem of mental health of the state, particularly at this time when Nigerians were grappling  with the challenge of depression.
In her address, Commissioner for Social Welfare and Rehabilitation, Mrs Inime Chinwenwo- Aguma, said the old structure was overcrowded,  dilapidated and suffered manual flooding with no medical centre and vocational training facility.
According to her,  it became difficult for the centre to perform its core function and service to the vagrant lunatics,  beggars and destitute often evacuated off the streets of Port Harcourt.
“This administration (of Wike) deemed it pertinent to remodel (reconstruct) the rehabilitation Centre. The re-established centre is now comprised of; an administrative building equipped with learning centres.
“A service building with kitchen,  dining hall and laundry room.  Staff building, separate hostels for inmates, an isolation centre, sick bay and recreational area.”