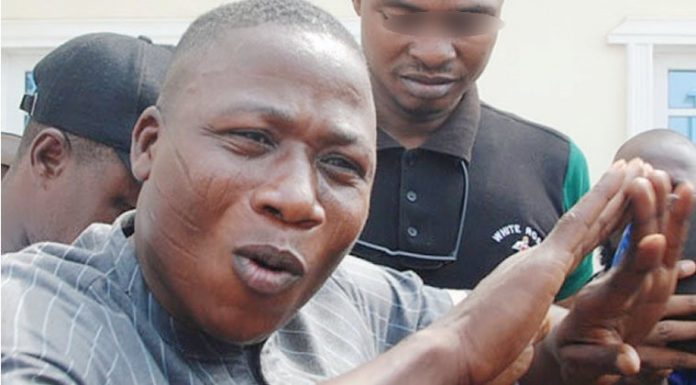 Yoruba activist,  Chief Sunday Adeyemo,  also known as Sunday Igboho  Oosa,  is demanding  N500,000 million from the  Federal Government as reparation for damage to his exotic cars that include Mercedes Benz G-Class and 2019 Lexus Car during the  invasion  of  his  residence by operatives of the Department of State Services on Thursday.

Igboho is also asking the Federal Government to offer a public apology for violating his fundamental rights as a Nigerian citizen by the Thursday invasion of his house which he said was without prior invitation by security agents.

Speaking through his lawyers on Saturday night, Igboho also asked the Federal Government to order an investigation into the actions of the various security operatives led by DSS that raided his house  with a view to sanctioning them and releasing all the innocent people arrested and compensate the families of those murdered.

A letter by Chief Yomi Alliyu (SAN) and co, counsel to Igboho  said the law firm had the standing instructions to defend and act as Counsel  to the Yoruba activist.

The letter read, “We were reliably informed that DSS and other security forces invaded the residence of our Client in wee hours of the day ( between 1.00hr and 4.30hrs).

“There is nowhere in civilised world that a citizen who had no prior invitation by security agent or resisting arrest will be so invaded with his rights to dignity of human persons, ownership of property and sanctity of life trampled upon during the invasion.

“Section 12 of Administration of Criminal Justice Act enjoins the police and/or any security operatives to first make a demand to enter a place where a suspect is and if their demand was not granted to break open the  “outer or inner door of any house or place.”

“ No demand to enter was made but rather they shot their way into the house allegedly killing seven (7) people though DSS spokesman admitted killing two people which involved an old imam that used to lead Muslim occupants in prayers and observing TAHJUD at the time of the barbaric raid.

“A lady among the invaders was allegedly shouting, “if you get him gun him down.” There and then our client knew that the mission was to get rid of him and NOT to arrest him. This belief becomes more realistic in view of the fact that the CCTV recorder was off and taken away so that the carnage will not be shown to members of the public. Our client then knew that he was to be taking dead or alive as allegedly stated by the lady among the raiders.”

It added that “Every Nigerian, albeit the whole world, is aware that in his open crusade for the establishment of Oodua Republic, our client has always preached peace and warned his followers never to have recourse to violence saying that “it is God and alale” that will fight for Yoruba Nation.

“We can boldly say that as people who followed his campaign, but not necessarily supporting dismemberment of Nigeria, that no casualty has ever occurred wherever such rallies were carried out.  This must have been done in more than 20 Yoruba towns and cities as at date.

“ To now invade the residence of such a peace loving crusader is tantamount to calling a dog a bad name to hang it. It must be reiterated, and with emphasis, that it is the right of a group of homogeneous and/or indigenous people in a Federation to ask for self determination in accordance with the rules of international law and UNO Charter.

“ Our Constitution also permits freedom of association and, by necessary implications, freedom to dissociate.

“ It should be stated that without any resistance or shooting at the security operatives they started shooting from the gate and ensuring that the building was totally made uninhabitable. Also, all the expensive vehicles in our clients house were shot at and destroyed.

“ The rampaging operatives were disappointed that they could allegedly not find a single gun or ammunition in our client’s house hence their arresting two (2) police escorts of Mr Sunday Igboho’s guests and added their guns to those harvested from their armoury with a view to making members of the public to believe that our client keeps militia or as stated by them, he is about waging war on Nigeria. Will this be with his mere amulets.

“People who know our client of over 20 years will testify that  Igboho Oosa does not carry gun on his person!

“ It is elementary law that whenever a search warrant is executed on a house, the house owner must first search the persons sent to execute same and also sign the inventory of what were recovered in executing the warrant!

“This explains why the DSS invaded the house in the night shooting everything at sight, killing and maiming the occupants to plant their illegal guns on our client.

“We have also been reliably informed that those arrested were being tortured to incriminate our client that guns and ammunition were recovered from his house.

“Sunday Igboho knew that he would be arrested one day hence retaining our services. He could not be that daft to keep incriminating articles in his house!

“Our client’s house is a 5 bedroom duplex with 5 chalets of 2 and 3 bedrooms. These were totally damaged with operatives allegedly arguing on whether to burn down the edifice as done to his former palatial house. The lady officer allegedly put her foot down against arson.”

The law firm explained that  One thousand euro, two million naira, expensive jewelleries worth millions, travel documents, amulets, iPhone 12 belonging to him, phones of about 15 others living in the house including those killed by the raiders and other belongings yet to be identified belonging to his wives were carted away. It said the only guns were those of the police escorts of his guests!

“More importantly, the DSS and other operatives that raided the house said they came to arrest Sunday Igboho but ended up arresting innocent people in lieu of him. Apart from being  a serious violation of these people’s constitutional rights, it is an assault on Section 7 of ACJA and decisions of our Courts in that regard.

“We hereby demand that the Federal Government orders an investigation into the actions of the various security operatives led by DSS that raided Chief Sunday Adeyemo’s house with a view to sanctioning them and release all the innocent people arrested and compensate the families of those murdered.

“ Our client should also be paid N500million as reparation for damage to his exotic cars that include Mercedes Benz G-Class and 2019 Lexus Car. We also demand a public apology.

“  Most importantly, trampling of our client’s fundamental rights  including tagging him as criminal by exhibiting DSS guns as this should stop forthwith.

“ In any  case as admirers of this government and one Nigeria, we personally implore all the Governors of Southwest States that know the yearnings of their people and Igboho’s large followership to wade in before it becomes hydra headed security problems in all their domains.”