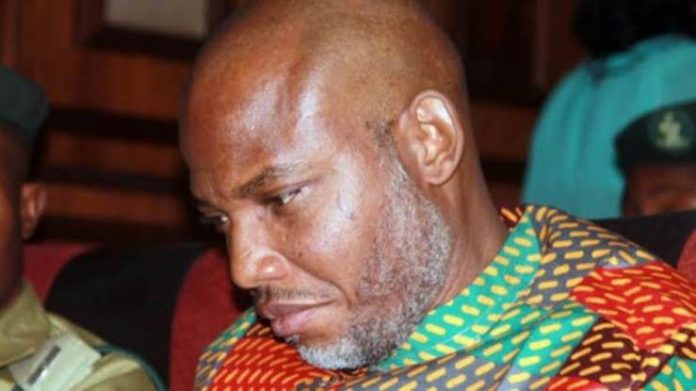 A former Nigerian Army Captain, Alhaji Ahmed Adoke, has said that the Nnamdi Kanu-led Indigenous People of Biafra killed more Igbos than they protected in their fight for secession since 2014.

The Civil War veteran called on the Minister of Justice and Attorney General of the Federation, Abubakar Malami (SAN), to speed up Kanu’s trial.

In a statement issued to the media in Abuja on Sunday in reaction to the re-arrest of Kanu, Adoke tasked Buhari to arrest the spate of secession threats with objectivity.

The statement read, “On Tuesday June 29th 2021, Nigerians woke up to the news culminating from the press release of the Attorney General of the Federation that the leader of self proclaimed Indigenous People of Biafra (IPOB) has been re-arrested.

“That news, filtering with awe and apprehension, did not only restore calm and hope to the dozens of families who have lost their loved ones due to the atrocities of IPOB, but also came with pride and eulogy for Nigeria’s secret police for their excellent job in ensuring that Nnamdi Kanu is apprehended abroad so as to face justice at home!

“Let truth be told, ever since it’s creation in 2014, the atrocities of the IPOB movement have caused more deaths, economic hardships, and infrastructural losses to the people they claim to represent than ever before.

“The resultant consequence of their inactions led the federal government of Nigeria to proscribe the group and labelled it a terrorist organization.

“Having jumped bail in 2017, Nnamdi Kanu had ample time and opportunities to retrace his steps.

“Rather than do so, he outrightly militarized his loyalists and continued to incite them towards violent insurrections and killings across Southeastern Nigeria.

“Now that the goose is finally at hand, I am confident that the Attorney General of the Federation, Abubakar Malami SAN, in his quest for rule of law, would ensure that justice is meted on this man whose actions and inactions have caused miseries in the lives of many Nigerians.

“As rightly put by President Muhammadu Buhari, those of us who fought the Nigeria civil war (1967-1970) would never wish it for our children or generations to come.

“As a participant of the Nigeria civil war, 1967 – 1970, I am gladdened that President Buhari, with whom we fought the war, has proven that he has always been true to his pronouncements and actions.

“President Buhari has always been an introvert of slow and steady nature that wins the race. I also commend the Nigeria security agents who covertly participated in the re-arrest of Kanu.

“There is nothing the Nigeria security agents want to do that fails given the rightful logistics.

“Therefore, it is high time the Nigerian State took bold steps towards restoring the dignity, indivisibility and sovereignty of our beloved Country.

“Indeed, our unity is divine, and we must not allow those who feign ignorance of the sacrifices of our heroes past to succeed in their aspirations of destroying what we have shared collectively.”