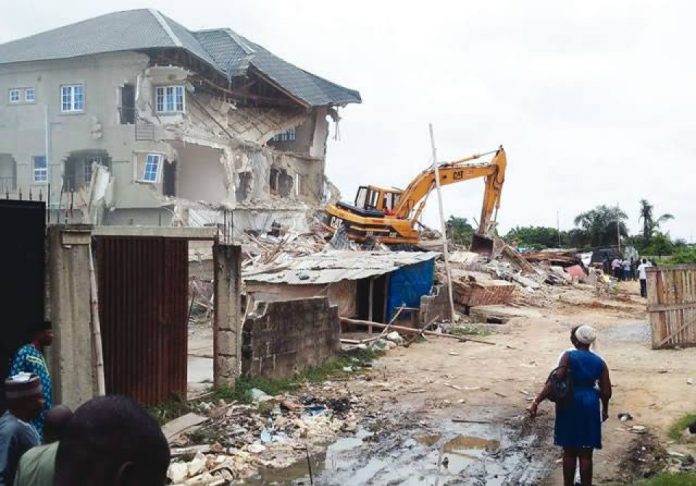 The Lagos State Building Control Agency has announced plans to start demolition of illegal, haphazard and non-conforming structures in the state.

LASBCA made this known in a statement posted on the state’s website.

LASBCA decried the illegal development, encroachment on government land and construction of haphazard, non-conforming buildings in Badagry Division of the state, saying that some of the  ongoing developments in the area deviate from the Lagos State’s Physical Planning Law.

Speaking on the exercise, Oki said several buildings in the area were issued Abatement Notices and Stop-Work-Order until the necessary documentation and regularisation is done with LASBCA, LASPPPA and other relevant agencies of the state government.

Oki, who had earlier paid a courtesy visit to some traditional rulers said that if the illegal developments are not checked on time, such would pose a huge threat to residents, distort the aesthetics of the community and threaten the security architecture of the area.

He said “The courtesy call to the palace is also to intimate you of the growing illegal building construction, particularly the indiscriminate citing of petroleum filling stations back to back without approval and its attendant consequences to the area.

“The Building Planning Law being enforced by LASBCA does not limit our operations to the Mainland alone, our activities cover everywhere there is building construction, which includes buildings in the coastal areas, hence the extension of our activities to this part of the state.

“Some of these stations are cited in areas planned as hospitals, schools or recreational centres, some are within a radius of 10 to15 metres to each other, while some are located right beside each other without any safety precautions.”

According to him, the agency will soon embark on the removal of all the illegal buildings and filling stations in the interest of public health and safety.