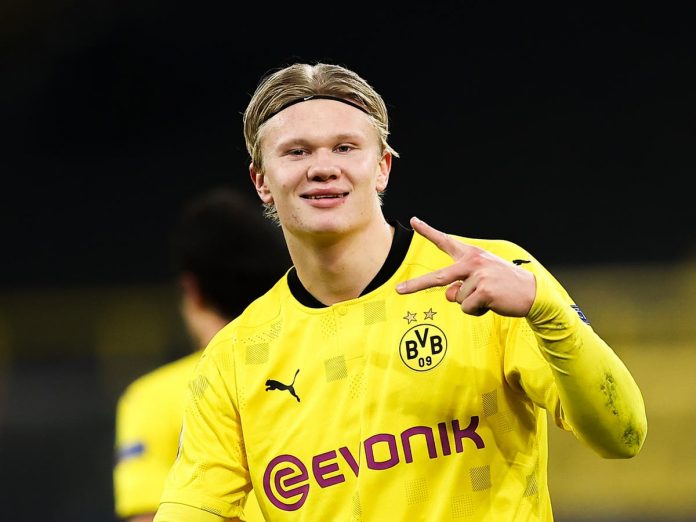 By Gideon Adonai
Chelsea are desperate to bring in a striker this transfer window. According to Express, Thomas Tuchel is keen on signing Erling Haaland. However, Borussia Dortmund are reluctant to lose the Norway international.
Chelsea have been quiet this transfer window despite winning the Champions League but there is one top target in their sights – Haaland.
After an incredible 41 goals in 41 appearances, Thomas Tuchel is desperate to bring the forward to Stamford Bridge but has been put off by the £150m-plus price-tag.
Nevertheless, Chelsea may see talks over a move for Haaland ramp up after their latest transfer activity.
Olivier Giroud is set to join AC Milan after an agreement between all parties, which will see the Frenchman move to the San Siro for £1.7m.
The striker signed a one-year extension earlier this summer but that was done simply to protect his value and see some sort of fee arrive at west London – despite it being minimal.
However, the deal means that Chelsea have just two strikers in the shape of Timo Werner and Tammy Abraham.
Neither have particularly impressed Tuchel, while Haaland is looking more and more like the only target at Stamford Bridge this summer – meaning they are prepared to put all their eggs in that basket.

The 20-year-old has the pick of the clubs around the world but his ultimate ambition is to win the Champions League.
After landing the trophy last season, the Blues are in a perfect position to convince the Leeds-born ace that his future lies in London.
Regardless of what happens, Chelsea are expected to offload a number of players with that being one of Marina Granovskaia and Petr Cech’s biggest tasks.
The wage bill has been inflated by peripheral players such as Davide Zappacosta, Tiemoue Bakayoko, Danny Drinkwater and Emerson Palmieri.
All of them could be cut loose this summer with Haaland in mind, whose transfer fee of £150m would be just one of many expensive hurdles.
The Norway international is expecting wages in the £300,000-a-week region while his agent, Mino Raiola, would also demand a hefty commission