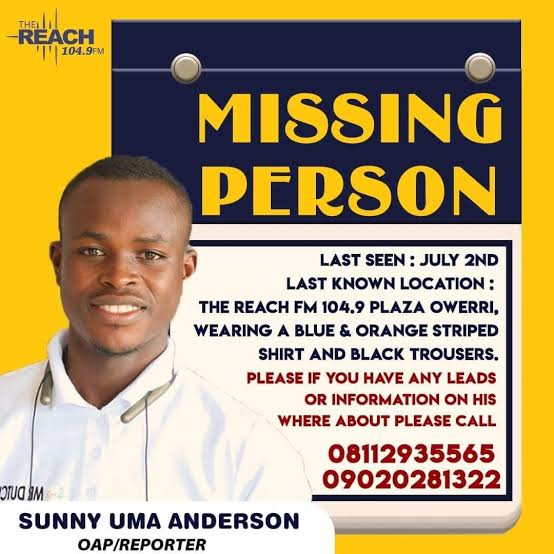 The management of Reach 194.9FM, Owerri, Imo State has declared one of its on-air personalities, Sunny Umah Anderson missing.

Reach FM is owned by the former governor of the state and senator representing Imo West District, Owelle Rochas Okorocha.

The station, in a statement published on its verified Facebook page, revealed that Sunny was last seen in the office on July 2, 2021.

It further disclosed that the missing presenter wore an orange t-shirt and black trousers the day he was seen last in the office and further appealed to the public to assist in searching for him.

It was said that the phone numbers of the presenter were also not connecting which made his friends intensify the search for his whereabouts.

The station urged anyone with useful information about the whereabouts of Sunny Umah, to call the General Manager of Reach FM on 08112935565.

Many of OAP’s fans have linked his disappearance to the altercation the radio station had with a state government agency, Owerri Capital Development Authority.

On Friday, July 2 it was said that the OCDA sealed the radio station for its inability to produce its building plan and blocked their access road.

Spokesman of the former governor, Sam Onwuemeodo criticised the OCDA’s reason for the sealing of the radio channel and wondered why anybody would be requesting for an approved plan of the building housing the radio station many years after it was acquired from its original owner.

He pointedly blamed the OCDA’s action on the perceived animosity which the state governor, Senator Hope Uzodimma harbours for his predecessor.