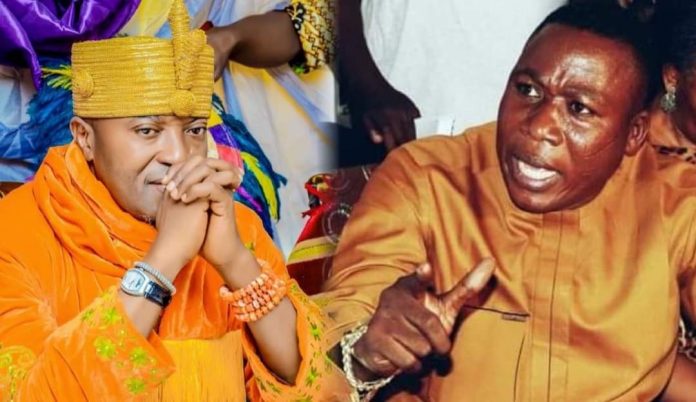 By Gideon Adonai
The camp of Yoruba nation agitator, Sunday Adeyemo alias Igboho, on Saturday denied that he was about to dialogue with federal authorities.
Reacting to comments by the Oluwo of Iwo, Oba Abdulrosheed Akanbi, to intervene in the face-off between government and Igboho, spokesperson for the activist, Olayomi Koiki, said there had been no contact between the monarch and the agitator lately.
Koiki also denied that Igboho was about to drop the agitation for a Yoruba nation.
Koiki, “Not at any time, not even a single call.”
But he admitted that Igboho visited the oba in 2018 to reciprocate a similar one by the traditional ruler to the activist.

READ ALSO: Bandits abduct Emir of Kajuru, 13 others in Kaduna

He said it was on that occasion at the Oluwo’s palace that the photograph of Igboho prostrating for the oba, now trending on social media, was taken.
“The news that Chief Sunday Adeyemo visited the Oluwo of Iwo, Oba Abdulrasheed Akanbi, is not true.
“The 2018 picture was taken during a return visit after he (Oluwo) came to chief’s house.”
He insisted that Igboho has also not dropped his agitation for a Yoruba nation.
He said any claim to the contrary was a lie.