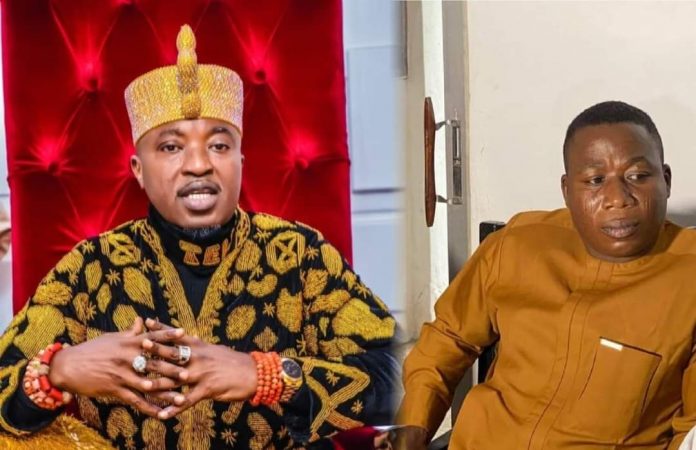 The Oluwo of Iwo in Osun State, Oba Abdulrosheed Akanbi, Contacted last night by men of the press, on the reaction from Igboho’s camp, Oba Akanbi said: “It is only Igboho that can speak for himself now. Nobody can speak for him.
“If he wants to continue fighting the way he has been fighting, let him go ahead.”
“If he wants his normal life back, let him go for peace. It is either he goes for peace or continues with ‘catch me if you can,’ with the DSS.
“The option is there for Igboho, but I won’t advise him to talk or say a word until peace is made.
“To return his life back to normal is my desire.
“Anybody that wants to lead the agitation can go ahead. It is Igboho that has something to protect. He has a life.
“He is our son, we won’t allow something bad to happen to him. He has a name.
“Sunday Igboho does not deal with some of those people who say they are speaking for him.
“Why didn’t you ask them when they spoke with Igboho?
“It is unfortunate that the majority of them are pushing him. They will just continue to push him until they kill him.

“To the extent that the DSS could claim responsibility that they attacked his house. They (DSS), said: ‘We went to Igboho’s house and we killed two people.’
“I think they just want to push him into trouble. Even before the current agitations, he was not poor. He was only misinformed and he has realised this.
“Did you hear anything from his mouth? Did you hear his voice disputing what I said?
“Government is beyond what they are seeing, what they are saying. Let them come out with where Igboho said this or that. Let them produce Igboho’s recording.
“I would advise Igboho not to say anything against the government. He should have his life to protect. He should keep quiet till we solve the present problem.
“Those people pushing him cannot do anything for him, rather when he gets into trouble, they will all run away and leave him to solve his problems.
“They have pushed him into trouble. He has a house, and he can’t go there.
“His wife is in trouble. His people are in a problem. His family members are in trouble.
“He is now running like a fugitive. He has been declared wanted. His passport has been seized.
“Those people pushing him, why can’t they come to the street and continue from where he stopped?
“Those who are speaking for him right now are not his closest aides.
“Some of them speaking for him are using him to make money.
“I told him that some of the people making noise were just pushing him. He did certain things that were beyond him, especially the idea of going to open the border. No government would allow that.
“Some of them are trying to justify their action by comparing Igboho with the bandits in the North. Do the bandits have a house? Do they have a name?
“Igboho has a house; he has exotic cars in his compound. He had been made a long time ago. Some of these people pushing him just want to make money.
“We will speak to the government to forgive him. This same government honoured MKO Abiola. Those who did bad things to Abiola did not honour him.
“Abiola was not on good terms with Buhari, yet it was the same Buhari that honoured him.
“The Igbo elders may not speak about Nnamdi Kanu and plead on his behalf and assure the government that they would tell him to stop some of the things he is doing.
“But we as Yoruba elders would not allow things to get worse. What we are doing right now is to find a way of getting him out of the trouble.
“He has a house, he can’t live in it. He has a car, he can’t ride it. His German passport has been seized.
“If the Igbo do not talk about the activities of Kanu, we would talk about our own before they start killing people in Yorubaland.
“Would you say how unknown gunmen have been killing people in the South East is good? Is that what we want in Yorubaland?
“We will draw his attention to it that ‘young man, where he is going is not good.
“I think the media hype entered Igboho’s head and those who are making money from the Diaspora are not telling him the truth
Sent from Yahoo Mail on Android