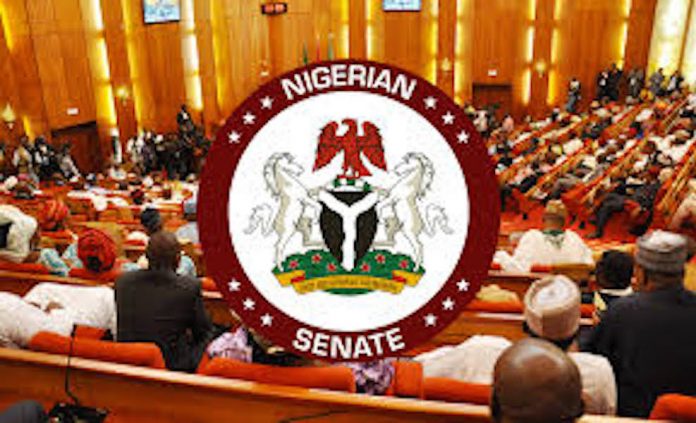 The Senate has faulted the Nigerian National Petroleum Corporation for under-remitting the sum of N3,878,955,039,855.73trn revenue from domestic crude oil sales to the federation account for the period of January to December, 2015.

Accordingly, the upper chamber called on the corporation to desist from further deduction at source as this contravenes Section 162(1) of the 1999 constitution (as amended).

It also mandated the Federation Accounts Allocation Committee or any other approving authority to, as a matter of urgency, approve agreed percentage which should be allocated to NNPC monthly as operational cost to ensure that their operations are not adversely affected.

These formed part of the 59 recommendations adopted by the Senate and contained in the report of the Committee on Public Accounts on the Annual report of the Auditor-General for the Federation on the accounts of the federation for the years ended 31st December, 2015.

The Senate in one of its adopted recommendations to the executive arm of government noted that the outstanding collection from solid minerals (N12,137,140,361.58) not remitted to the federation account, but kept in an account maintained by the Central Bank of Nigeria contravenes the provisions of Section 162(1) of the 1999 constitution as amended.

The chamber, therefore, charged the Federation Accounts Allocation Committee to fix a percentage to be allocated to Mining and Cadastral Office as cost of collection as is currently applicable to NCS (7 percent), DPR (4 percent) and FIRS (4 percent) of non-oil revenue.

On unretired advances involving 39 Ministries, Departments and Agencies (MDAs) to the tune of N2,296,567,084.37 billion, the upper chamber demanded the sanctioning of accounting officers of MDAs in accordance with the provision of Rule 3124 of financial regulations.

It also call gave the Accountant-General of the Federation, Ahmed Idris, a deadline of 90 days to identify and sanction officers responsible for mismanagement of public funds to the tune of N54,151,360,000 billion ($274,280,000.00) as exchange loss on external loans.

The Accountant-General is expected to report back to the Senate Committee on Public Accounts within ninety days.

In addition, the Senate gave another 90 days timeline for the Office of the Accountant-General of the Federation to set in motion the process of recovery of internal loans made from other funds which stands at N390,288,085,668.92 billion and to be paid back into the special funds accounts.

In another vein, the upper chamber directed the Accountant-General of the Federation to recover the sum of N378,879,674.99 tax revenue from Webb Fontaine Ltd and remit same to the Federal Inland Revenue Service within six months.

It also called for a review of all companies that were paid from the out-flow of one percent CISS Account which amounted to N39,557,671,843.97.

The upper chamber also directed the Nigerian Posts Authority to refund the sum of $37,627,939.75million to the Federal Government coffers due to lack of diligence in the review of NPA’s charges on a contract of towage services.

It also mandated the Economic and Financial Crimes Commission to subject the accounting officer to investigation in accordance with Rule 3112 (I and II) of the financial regulations.

The upper chamber also demanded that the Director-General who authorised the disbursement of contingency provision on the contract for the rehabilitation of Lagos Habour moles to the tune of N417,099,309.06 without Federal Executive Council approval to be reported to President Muhammadu Buhari in accordance with Rule 3103 of the financial regulations.

On other funds diverted by the NPA, the Senate demanded a refund of various sums in local and foreign currencies, consisting of N1,075,266,599.06, $2,301,329.54 (USD), and €196,257.42 (Euros) meant for the Presidential Implementation Committee on Marine Safety and Security to the account of the National Security Adviser to the o President, contrary to a directive approved by the Federal Executive Council on February 21, 2007.

It added that the non-remittance of another N67,508,041,250.00 for 2013 and 2014 into the Consolidated Revenue Fund being 25 per cent of its Internally Generated Revenue contravened the Fiscal Responsibility Act 2007.

It further noted that the failure to remit capitalized interest to the Consolidated Revenue Fund totaling N99,712,464.24 between 2013 and 2014 contravened Rule 236 of the financial regulations.

On financial infractions by the Federal Ministry of Petroleum Resources, the Senate called for the sanction of the Permanent Secretary in accordance with Rule 3129 of the Financial Regulations and Public Service Rules 030402 over the diversion of N23,642,000.00 from the Capital Projects Funds for purchase of Sallah/Christians welfare package to staff of the ministry.

It also called for the identification of the Project Accountant, who authorised the diversion of N32,783,052.00 meant for IPPIS training and other programmes to bank accounts of staff of Finance and Accounts Department, instead of paying the approved amounts to beneficiaries.

The Senate demanded the refund of the amount to government coffers, including the sum of N718,911,848.00 made in the cashbook as payments to eleven corporate bodies without documentation.

In addition, the chamber called on the Ministry to identify and present for disciplinary action, the officers behind the authorization of N98,400,000.00 in favour of a company for printing of leaflets for the Petroleum Industry Bill awareness campaign programme; N54,000,000.00 to a company for assessment and documentation of Oil Spill sites in ten (10) states of the Niger Delta; and N25,000,000.00 for actualizing e-governance procedure.

The infractions, the Senate noted, were in violation of Rule 3117.

The Senate called on the Economic and Financial Crimes Commission to prosecute within 30 days, the officers in the Ministry of Youths and Sports (National Sports Commission) who certified the payment of N37,185,000.00 from the Capital Vote allocation.

It also directed that N2,695,985.00 be recovered from the emolument of the Director-General of the Small Medium Enterprises Development Agency, who authorized that the sum be paid to individuals instead of a company’s account.

The Senate, accordingly, also demanded the prosecution of the accounting officer with SMEDAN, who approved the sum of N38,038,238.14 without relevant and supporting documents in contravention to extant laws.

In meting further disciplinary actions, the chamber called on the EFCC to prosecute within thirty days, officers of the Nigeria Bulk Electricity Trading PLC, who were behind the non-remittance of accrued interest on investment in Nigeria Treasury Bills.

It also sought the prosecution of officers of the National Hospital, Abuja, and the Rural Electrification Agency within the same time frame, who were involved in the diversion of N20,915,998.00 and N14,086,246.00, respectively.

The Senate requested the Medical Director of the Jos University Teaching Hospital to refund the sum of N26,321,041.01; and the Federal Neuro-Psychiatric Hospital, Aro, Abeokuta to pay back N19,382,047.50 to the Treasury.