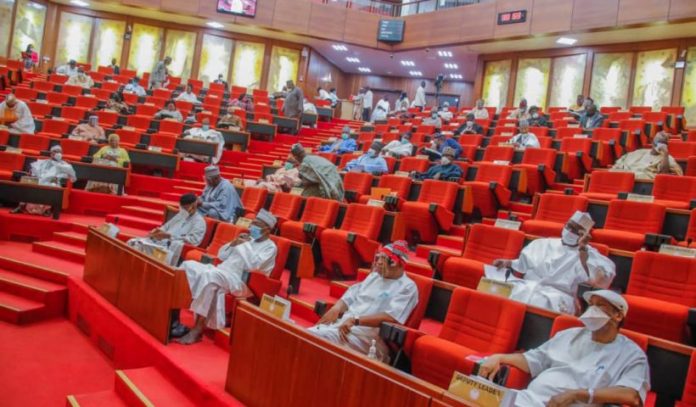 The Senate has condemned insinuations that the leadership of the National Assembly has tinkered with the report of Committees on Independent National Electoral Commission on Electoral Act (Amendment Bill) 2021.

Some Nigerians had alleged that leaders of the National Assembly had altered the reports on Electoral Act (Amendment) Bill 2021 set to be considered at both chambers on Thursday this week.

The agitators pointed out that the clause providing for electronic transmission of results from 8, 809 wards across the country to the INEC server, had been removed by the leadership of both chambers.

Though both the President of the Senate, Ahmad Lawan, and Speaker of the House of Representatives, Femi Gbajabiamila, debunked the insinuation.

But at the plenary on Wednesday, the Senate again criticised their critics.

Rebuttal of the insinuation came to the fore after the Chairman of the Senate Committee on INEC, Senator Kabiru Gaya (APC Kano South), laid the report for consideration.

The Senate President in his remarks after the laying of the report said the report laid is new to the leadership of the Senate and fellow senators, which unfortunately had alleged to have been tampered with.

Lawan  said, “Let me say this on this report that had been used to blackmail the leadership of the National Assembly within the last two weeks by those who are either ignorant or mischievous or even rabble rousers.

“As against their insinuation and blackmail that the report had been tampered with, whatever will be discussed or adopted from the report, will be based on what has just been presented.

“My telephone lines got over 900 messages from concerned Nigerians last week on alleged removal of certain provisions from the report, the same way that of the Speaker was also bombarded with similar messages.

“On my part, I explained to them that nothing had been done on a report that was yet to be presented then and now that is presented, those agitating for one thing or the other should lobby their senators before clause by clause consideration of it.

“We will do what is right. We have our procedures and lobbying is part of democracy.”