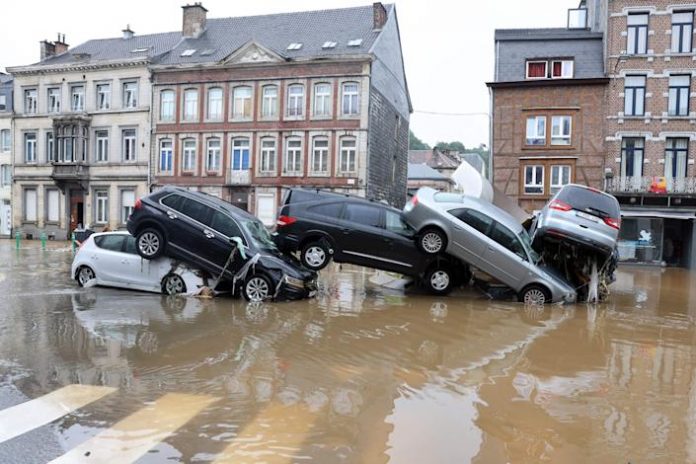 Heavy rains and flooding in Western Europe have killed at least 59 people in Germany and eight in Belgium, and many more people are missing as rising waters caused several houses to collapse on Thursday.

Unusual heavy rains also inundated neighbouring Luxembourg, the Netherlands and Belgium, where at least four people were reported dead and people were ordered to evacuate a riverbank in one city.

In Germany, which is experiencing one of the worst weather disasters since World War II, desperate residents sought refuge on the roofs of their homes as rescue helicopters circled above.

Pensioner Annemarie Mueller, 65, looking out at her flooded garden and garage from her balcony, said her town of Mayen had been completely unprepared for the destruction.

“Where did all this rain come from? It’s crazy,” she told AFP, recalling the floodwater crashing through her street during the night.

“It made such a loud noise and given how fast it came down, we thought it would break the door down.”

Chancellor Angela Merkel on a visit to Washington, said she was “shocked” by the humanitarian “disaster”, calling it a “tragedy” for the nation.

She vowed that the government would do “everything in its power to under the most difficult circumstances, save lives, prevent danger and ease suffering”.

The North Rhine-Westphalia interior ministry tallied four more bodies recovered, taking the region’s toll to at least 31, while neighbouring Rhineland-Palatinate said nine more deaths were likely in addition to 19 recovered in the region around the western town of Ahrweiler alone.

Up to 70 people are missing, a police spokesman told AFP.

NRW’s Euskirchen district reported 15 dead, while four more victims were found in the municipality of Schuld south of Bonn where six houses were swept away by floods.

Several other bodies were recovered from flooded cellars across the region.

In the city of Leverkusen, a power outage triggered by the storms led to the evacuation of a hospital with 468 patients.

Belgium has also seen several days of heavy rain that has caused rivers in the French-speaking region of Wallonia to burst their banks.

The Luxembourg government set up a crisis cell to respond to emergencies triggered by heavy rains overnight as Prime Minister Xavier Bettel reported “several homes” had been flooded and were “no longer inhabitable”.