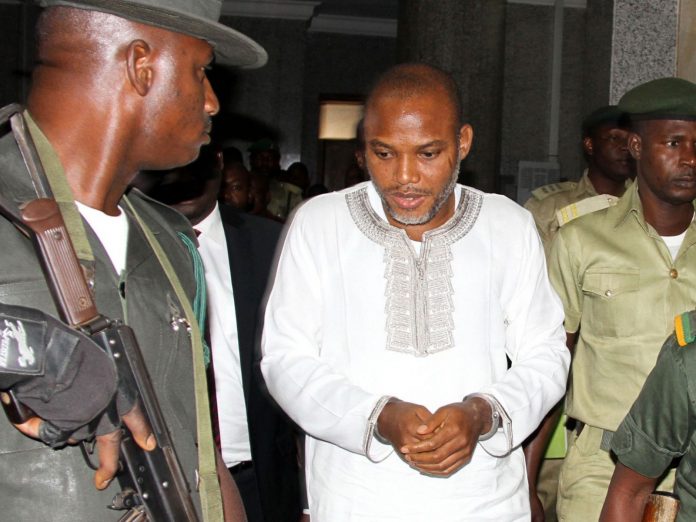 Leader of the proscribed Indigenous People of Biafra, Nnamdi Kanu, has said he has been subjected to mental and psychological torture by the Department of State Services.

Kanu, in a fresh application filed before the Federal High Court, Abuja, wants to be transferred from custody of the DSS to the correctional centre in Kuje.

Speaking through his counsel, Mr. Ifeanyi Ejiofor, Kanu decried the prosecution agency’s refusal for him to access his doctor, adding that if nothing was done urgently, he might die in the DSS custody.

In the application, Kanu wants an order of the trial court, “Directing his transfer from the custody of the National Headquarters of the DSS to the Nigerian Correctional Service Centre in Kuje, Abuja, within the jurisdiction of this honourable court, where he was initially detained before he was granted bail pending the determination of the charge.

Meanwhile, in the fresh application, Kanu alleged that he had been “subjected to mental and psychological torture” by the DSS, saying it would be in the interest of justice for the court to order his transfer to the Nigerian Correctional Service Centre, which he described as “an impartial facility that had no interest whatsoever” in the outcome of his trial.

In an affidavit attached in support of the application, Kanu alleged, “That this charge No. FHC/ABJ/CR/383/2015 came up on June 29, 2021 and the applicant was brought before the court in chains, handcuffs and leg-cuffs, blindfolded, and was consequently remanded in the custody of the Department of State Services, even though there was no legal representation for the defendant, and the matter was, therefore, adjourned to the 26th day of July 2021 for trial.

“That the counsel for the applicant was not served with any hearing notice before the appearance of the applicant in court, neither were they aware that any action was scheduled to take place in the criminal charge No. FCH/ABJ/CR/383/2015 on that June 29, 2021.

“That on July 2, 2021, at about 12:32pm, the Department of State Services called me to inform me that our request to visit the applicant has been approved and that I should come by 4:00pm to see defendant.

“That on the said July 2, 2021 at about 5:00pm, at the DSS Headquarters, in Abuja, the applicant informed me of the following facts, which I verily believed to be accurate and correct as follows: That he was kidnapped and/or abducted by Kenyan security forces on June 19, 2021, specifically at Nairobi Airport.

“That he was detained by the personnel of the Kenyan Police Force for eight days, and was throughout this period of detention subjected to all forms of inhuman treatment, brutal torture, causing grave and severe heart problem that almost took his life. That he was detained in an unconventional facility, not necessarily a police detention center in Kenya.

“That throughout this detention in Kenya, he was never allowed access to his relatives before he was handed over to their Nigerian security counterparts, who smuggled him into Nigeria in clear violation of his rights.

“That he is still being subjected to mental and psychological torture by his custodians, on account of the conditions of his solitary confinement. That an ECG examination was carried out on the defendant, and it was discovered that the defendant’s heart had been enlarged by more than 13 per cent, posing a serious threat and danger to defendant’s life.

“That there is a need for the defendant to have access to his medical doctors to avert the danger looming against the life of the defendant. That the health personnel attending to the defendant in the custody of the Department of State Services is not adequate considering the circumstances of the defendant’s health condition.”