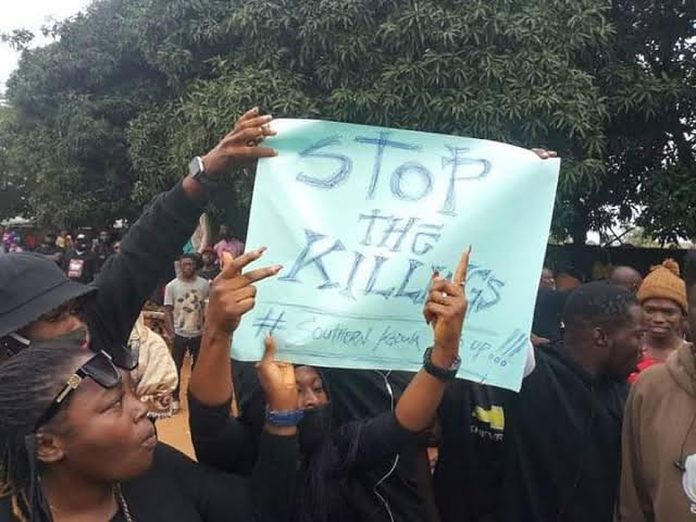 Youths under the aegis of the Southern Kaduna People’s Union have reportedly protested the rising spate of killings and kidnappings in Kaduna State.

The youth were said to have started the protest on Saturday to call out the governor and chief security officer of the state, Nasir el-Rufai, over the worsening security under his watch.

According to the youth, who reportedly gathered at the Unity Fountain in Abuja, the insecurity in the North-West state was becoming alarming.

The youth, therefore, demanded that the security forces, as well as government at all levels, must wake up quickly from their slumber.

One of the youth, Jane Thomas-Rogers, told newsmen that the governor must rise to his responsibility and secure the people.

She said, “Children are being raped, women are being raped, people are being killed. Governor Nasir el-Rufai, you need to stand up to your responsibilities and protect lives and properties. For how long is this going to continue? We are tired of these; the killings must end.

“Kidnapping here and there. Before now, kidnapping was an occurrence on Abuja road but right now, it has moved to Southern Kaduna.

READ ALSO:Yoruba Muslims will not be safe in Oduduwa Republic –MURIC

“People cannot sleep with their eyes closed, we are scared of going to Kaduna. Just recently, my cousin was kidnapped, we had to pay ransom before he was released; we couldn’t sleep.

“What is happening? And our governor does not even have sympathy for our plight as a people. This carnage must stop, enough is this.

“We are calling the attention of the international community to this. Our government is sleeping, something must be done.

“We call on all Nigerians to speak up against this. It started in Southern Kaduna, it can reach your doorstep tomorrow.

“Right now, there is a protest going on and you can see security men all over but when there is killing, kidnapping, you won’t see any of them. What is happening? We the youths are tired, enough of this.”

Kaduna has of late become a hotbed of heinous crimes.

The state’s Commissioner for Internal Security and Home Affairs, Samuel Aruwan, recently said bandits killed no fewer than 222 and abducted 774 persons, as well as injured 226 persons among them women and minors in the state between April and June 2021.