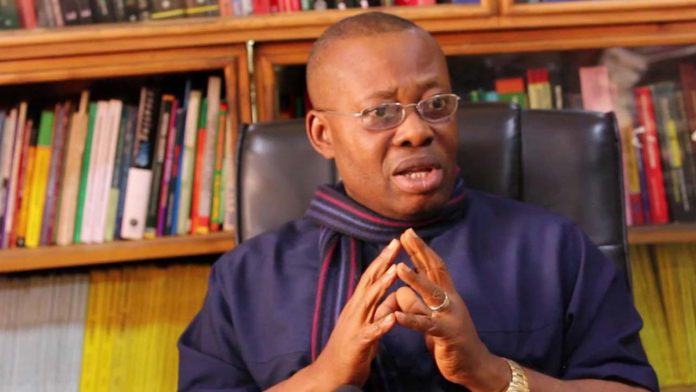 Ubani in a statement on Sunday said the lawmakers showed ‘legislative rascality’ during the debate and passage of the bill.

Recall that a particular clause in the bill, Section 52, has generated heated controversy in both chambers of the National Assembly.

The same clause caused a rancorous session in the House of Reps which pitted the lawmakers against each other.

And at the end, the bill was passed in absence of the Peoples Democratic Party members, who staged a walk-out.

Reacting to the whole melee, Ubani said that broad electoral reforms involved the deployment of technology in our electoral process.

He said, “It is shameful that Nigeria with her size, resources and sophistication are even starting late on this because other nations smaller in size, resource, sophistication have deployed this system years ago and here we are in the year 2021 debating whether we should deploy technology in the transmission of our electoral results.

“I feel humiliated by such a scenario playing out in the hallowed chambers of our National Assembly. Who does that, if I may ask?”

Ubani further gave reasons why the electoral amendment passed by lawmakers should not see the light of the day.

“What the National Assembly members did by passing a bill that violates the constitution they swore to uphold is the biggest embarrassment of the century.

“It is more shocking and depressing to see those who claim to be lawyers amongst them running around all over the place to defend the absurd illegality. Who did this to us as a nation?

“A cursory look at the provisions of the constitution will give each observer a clearer view of the sordid absurdity in the passage of the bill by the National Assembly on the 16th of July, 2021.

“Section 78 of the 1999 constitution as Amended provides:-‘The registration of voters AND CONDUCT of elections shall be subject to the DIRECTION and SUPERVISION OF INDEPENDENT NATIONAL ELECTORAL COMMISSION,(INEC).

“The same constitution in the Third Schedule, Part 1, F, S.15 provides that: ‘INEC has the power TO ORGANIZE, UNDERTAKE, AND SUPERVISE ALL ELECTIONS’. The constitution further provides that in carrying out the aforementioned responsibilities, ‘INEC operations SHALL not be SUBJECT TO THE DIRECTION OF ANYBODY OR AUTHORITY’,” he added.

The former NBA Vice Chairman picked holes in the arguments given by some of the lawmakers that opposed e-transmission of election results.

He said, “The so-called affirmation of network coverage and its security by NCC and approval of the National Assembly (a party to an election) not an undue interference to INEC’s power to transmit the result of an election which falls squarely under their constitutional power?

“How did the members of the National Assembly see their role in approving the issue of network coverage as proper under our constitutional democracy when the role assigned by the constitution to them is LEGISLATION and not EXECUTION of the laws they enact?

“I shudder to think that our legislators who are lawmakers have turned themselves into lawbreakers.

“Before now, INEC without any legislative backing has successfully conducted elections with card readers and have transmitted results electronically in several constituencies in Nigeria without any of these “alarmist drawbacks” being trumpeted by these backwards-thinking legislators that voted for that provocative amendment.

“Why are these sets of legislators in the 9th Assembly trying to set the hand of our clock backwards? What has come over them?

“Nigerians insist and I join them in insisting that INEC be given a fair and less restrictive legal framework to carry out their constitutional duties of organising, undertaking and supervising elections in Nigeria.

“The present manipulative treachery to keep us stranded as a nation in our electoral improvements will be resisted with our last strength and we have the final hope placed on the third arm of the government( the judiciary) should these set of legislators persist in their doomed journey of interfering on our progressive electoral journey as a nation.

“Nigeria has two years to ensure 100 per cent network coverage in the whole country, after all, the nation is alleged to have voted over N4bn recently to monitor Nigerians on social media platforms.

“I see no reason why we cannot vote more billions of naira for the development of our key telecommunication infrastructure that will restore our dignity as the biggest country in the African continent.”