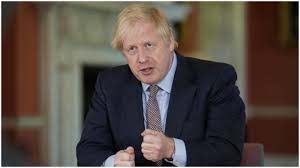 British Prime Minister Boris Johnson will spend 10 days self-isolating after contact with a confirmed coronavirus case, his office said on Sunday – reversing an earlier announcement that he would not have to quarantine.

Johnson, along with Finance Minister Rishi Sunak, were both designated after Health Secretary Sajid Javid said he tested positive for COVID-19 on Saturday.

Euronews reports that Downing Street initially said the pair will take a daily COVID-19 test instead of self-isolating as part of a new government pilot scheme.

But the plan was reversed less than three hours later amid accusations of double standards in the treatment of politicians.

Downing Street said Johnson would self-isolate at Chequers, the prime minister’s country residence, and “will not be taking part in the testing pilot.”

It said Sunak also would self-isolate.

Earlier on Sunday, Labour’s shadow Health SecretaryJohn Ashworth told Sky News that the public will see “one rule for them and something else for the rest of us.”

The UK is said to face a “pingdemic” of hundreds of thousands of people  being told to quarantine because they have been near someone who tested positive.

Businesses including restaurants, car manufacturers and the London subway say they are facing staff shortages because of the self-isolation rules.

The controversy comes as the country prepares to lift most remaining pandemic restrictions in England on Monday.

But with cases soaring, the decision to ditch COVID-19 curbs has sparked criticism from experts and opposition politicians.

“As international experts have said, lifting all restrictions at once on Monday is an experiment,” tweeted Munira Wilson, health spokeswoman for the opposition Liberal Democrats.