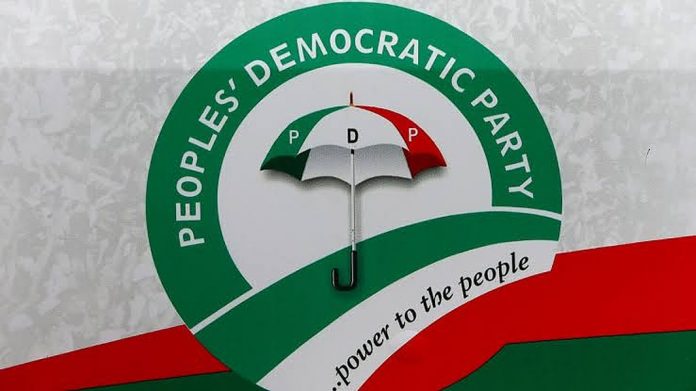 The Peoples Democratic Party has alleged that Justice O.A Nwabunike of the Anambra State High Court was plotting to derail the course of justice by making away with the case file on Senator Ugochukwu Uba Vs PDP & Ors case, “in a desperate bid to frustrate an appeal against his judgment on PDP Anambra State governorship primary.”

The PDP called on Nwabunike to immediately release the case file “as
the compromises in the case are already known to the public, especially
the people of Anambra State”.

The party stressed that the only reason Justice Nwabunike disappeared
with the case file and refused to make copies of his judgment available
to the PDP and its candidate, Valentine Ozigbo, was because he (Justice
Nwabunike) was aware that his judgment could not stand in any
appeal.

The PDP recalled that on July 5, 2021, Senator
Uba, who did not participate in the PDP primary, instituted a suit
against the PDP, our candidate, Valentine Ozigbo and the Independent
National Electoral Commission, wherein he challenged Ozigbo’s
candidature for the November 6, 2021 governorship election.

The party said, “Barely 24 hours after Senator Uba instituted the suit, Justice Nwabunike curiously granted an ex parte injunction restraining INEC from carrying
out their constitutional duty and also abridged the time within which
the defendants are legally obliged to file their defence from 42 days to
only 3 days in violation of Order 16 Rule 1(2) of the Anambra State High
Court (Civil Procedure) Rules 2019.

“Despite the obvious hardship created by this strange ex parte order, the
judge, on the day of hearing, being the 16th of July 2021, denied the defendants time to respond to the processes served on them and proceeded with the hearing of the plaintiff’s case.

“Regardless of the 180 days provided by the constitution for the hearing
and determination of pre-election matters, the court hastily concluded proceedings and delivered judgment within 14 days.

“The most unfortunate part of this episode is that the judge, after
hastily delivering the judgment, made away with the case file and refused to release copies of his judgment to the defendants despite their application in the open court as well as the officially written
application to the judge.

“However, to the chagrin of the defendants, the court has gone ahead to
issue copies of the judgment to the plaintiff, Senator Uba.

“Moreover, the trial judge has been making every effort to frustrate the
notices of appeal filed by the PDP and her candidate, Ozigbo.

“The PDP notes that the reason Justice Nwabunike is employing these legal
shenanigans is to frustrate the defendants’ appeal against his judgment,
which was aimed to assist an individual who did not participate in our
primary to distract our party ahead of this crucial election.

“We therefore call on the Chief Judge of Anambra State, Honorable Justice
O.M Anyachebelu and the National Judicial Council to quickly call
Justice O.A Nwabunike to order as there must be an end to judicial
rascality.

“Justice Nwabunike must be made to release the case file as well as the
copies of the judgment because his continued refusal is capable of
pitching the judiciary against the people of Anambra, whose mandate, as
being expressed in our candidate, Ozigbo, is being undermined
by Justice Nwabunike.”