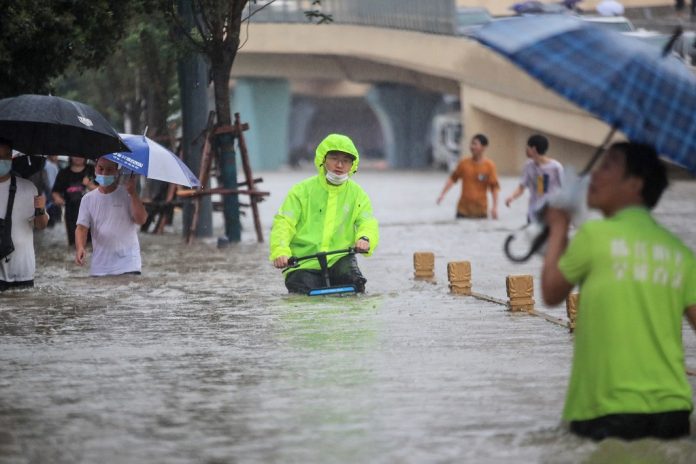 By Gideon Adonai
Record rainfall in central China caused severe floods, which have claimed at least a dozen lives, turned city streets into gushing rivers and forced authorities to relocate some 100,000 people and mobilize troops to save dams on the brink of collapse, according to Wall Street Journal.
Henan province has been pelted by heavy rains since Saturday, with its capital of Zhengzhou among the worst-hit areas.
Local news reports and social-media posts showed inundated neighbourhoods, submerged cars, residents stranded in schools and workplaces, and flooded subways with commuters standing in water up to chest-deep.
Zhengzhou’s meteorological station said hourly and daily rainfall over recent days have reached record highs, with nearly a year’s worth of rainfall pouring down on the city over just three days, according to a video posted to the station’s official microblog late Tuesday.
Chinese leader Xi Jinping ordered urgent relief efforts to minimize loss of life and property, as well as to prevent post flood outbreaks of disease, according to the official Xinhua News Agency.
Henan is one of China’s most populous provinces, home to more than 99 million residents, and one of its poorest, with an economy reliant on agriculture and industry.
It is also the site of a wealth of cultural-heritage sites, and the floods have buffeted many tourist destinations.
The Shaolin Monastery, a Buddhist temple west of Zhengzhou famous for its monks’ martial-arts prowess, was forced to shut its doors to tourists, according to local media reports.

One of the world’s biggest iPhone manufacturing sites is in Zhengzhou, where contract manufacturer Foxconn Technology Group employs hundreds of thousands of workers to assemble the Apple Inc. smartphones.
A Foxconn spokesman said the flood hadn’t had any direct impact on the plant so far, and that the company has implemented an emergency flood-response plan.
Chinese troops are rushing to overwhelmed dams and river embankments in efforts to hold back or redirect floodwaters.
In a series of social-media posts, the People’s Liberation Army’s Central Theatre Command described efforts to plug breaches, reinforce embankments and, in one case, prepare to blast a damaged dam that could collapse after a roughly 65-foot-long fissure appeared.
China regularly experiences summer flooding, though Chinese meteorologists say recent torrential rainfall in Henan could have been exacerbated by a typhoon approaching the country’s eastern coast and geographical factors in the province.
In a social-media post on Tuesday, China’s National Meteorological Center said Typhoon In-Fa and air currents have pushed water vapours toward Henan, where it converged upon reaching a mountainous area and resulted in heavy rainfall.