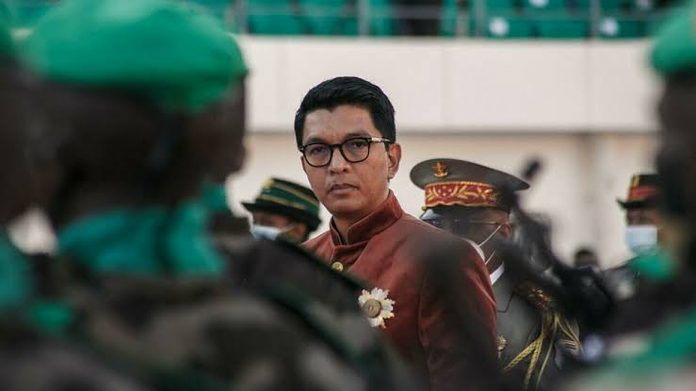 By Gideon Adonai
At least six people including a foreign national have been arrested in Madagascar over a plot to assassinate the country’s President, Andry Rajoelina.
Rajoelina, 44, was sworn in as President in 2019 after a hard-fought election and a constitutional court challenge from his rival.
Following the arrest of the suspects, the country’s Attorney-General in a statement said  “According to the evidence in our possession, these individuals had devised a plan for the elimination and neutralisation of a number of people including the head of state.”
It added that investigations were still ongoing.
Officials did not give details on the extent of the plot or how far advanced it was when the suspects were apprehended.
A separate statement by the public security minister on Wednesday confirmed that six people had been arrested: one foreign citizen, two dual nationals, and three Madagascans.
“The police had information for several months, but only now was there an opportunity to arrest them,” that statement said.
Rajoelina first seized power in the deeply impoverished former French colony of 26 million in a March 2009 coup, ousting Marc Ravalomanana.
He remained in control at the head of a transitional government until 2014.
In the 2019 elections, Ravalomanana challenged Rajoelina, lost, and cried fraud.
Nine out of 10 Madagascans live on less than $2 a day.
Climate change and deforestation have exacerbated the worst drought for four decades in the south of the island.