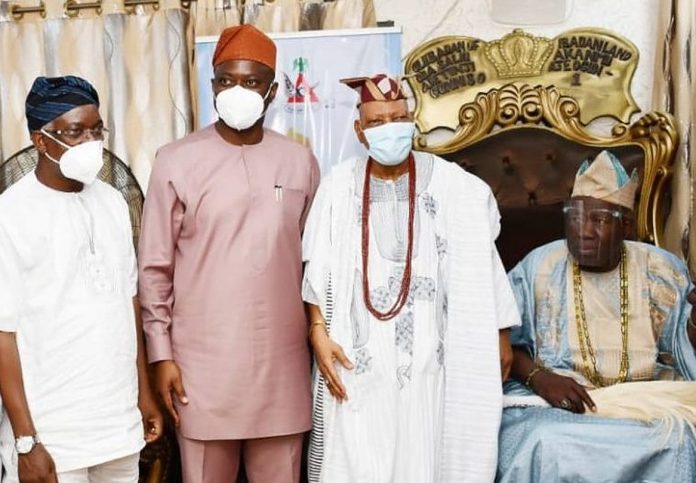 Oyo State governor, ‘Seyi Makinde, has said that he will in August inaugurate the state’s Inter-faith Committee to solidify the relationship between adherents of the Islam and Christianity faiths.

Makinde, who stated this while paying the traditional sallah visits to Islamic and political leaders in Ibadan, the state capital, urged those trying to use religion to divide the people to desist.

According to him, “in Oyo State, all of us have Christians and Muslims in our families,” adding that religion should not be be used for divisive tendencies.

The leaders visited by the governor include the Olubadan of Ibadanland, Oba Saliu Adetunji; the Aare Musulumi of Yorubaland, Edo and Delta states, Alhaji Dawud Makanjuola Akinola; a former governor of Oyo State, Rashidi Ladoja; the Seriki Musulumi of Yorubaland, Akhaji Yekini Adeojo; and former President, Central Council of Ibadan Indegens, Chief Bayo Oyero.
A statement by the Chief Press Secretary to the governor, Mr. Taiwo Adisa, quoted
Makinde, who spoke at the residences of the leaders, as thanking the Almighty for seeing Muslims and residents of Oyo State in general through the festive celebration.

He stated that his visit to the respected leaders was to felicitate them on the occasion of this year’s Eid-el-Kabir celebration.

The governor said, “Let me also use this opportunity, once again, to inform those trying to use religion to divide us in this state, that it is not possible in Oyo State because all of us have Christians and Muslims in our families.

“And I am happy that Aare Musulumi, during his remarks, reminded us of the Inter-faith Council we are planning to inaugurate, which will solidify the relationship between those practicing both religions.
“So, we will inaugurate the council within the first or second week in August.

“I am very sure that the people of Oyo State will never listen to them because the people know what they want but there is no need to keep overheating the polity. We have so many things we want to do and they should allow us to focus on those things.
“What they need to do is to assist us to have the type of state we deserve and desire, because governors will come and go but our state will remain.

“So, let us beg them because our state is far more important than individual aspirations. Anyway, Christians and Muslims believe that nobody can achieve anything except God supports him or her..

“I want to specially thank all the Muslims in Oyo State for supporting this administration and I pray that today’s celebration won’t be the last.”
In another development, Makinde announced the donation of a bus to the Freelance Independent Broadcasters Association of Nigeria.
He told members of the association at the residence of Aare Musulumi, “I want to also use this opportunity to recognise the Freelance Independent Broadcasters Association of Nigeria FIBAN. And I want to make this day we are celebrating Aare Musulumi of Yoruba, Edo, and Delta states significant, by fulfilling one of the promises I made to your association. The bus I promised you is ready and by Friday, you can come for it.”