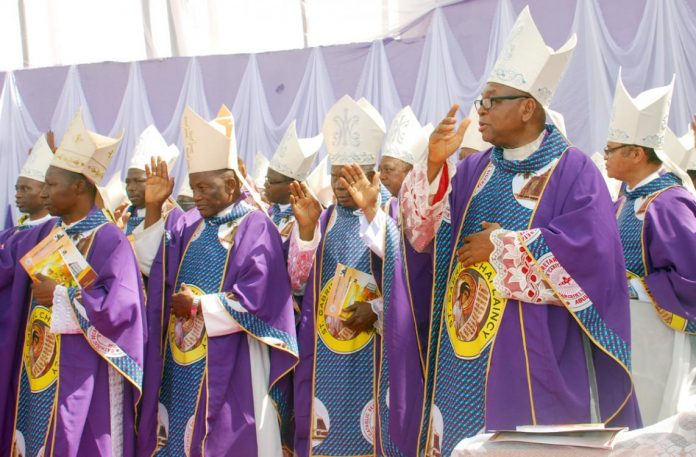 Catholic Bishops have said that developments in the country showed that justice, equity and fair play have fallen apart and the country was no longer at ease.

They decried that the present President Muhammadu Buhari-led government was allergic to truth.

These were contained in a communiqué issued at the end of Bishops of Ibadan Ecclesiastical Province 2021 meeting, compris­ing Ibadan, Ilorin, Ondo, Oyo, Ek­iti and Osogbo dioceses on from July 19-20.

A statement made available to newsmen in Ado-Ekiti by the Catholic Bishop of Ekiti Diocese, Most Rev. Felix Ajakaye, said the communiqué was signed by Most Rev. ‘Leke Gabriel Abe­gunrin and Most Rev. John Akin Oyejola, Chair­man and Secretary, re­spectively.

The communiqué, which noted that “Nigeria seems to have lost its very soul because it is no longer a healthy entity”, admon­ished Nigerians to stand firm and not lose hope but continue to pray and work for a better nation.

The bishops also lament­ed that the alleged high lev­el of despondency in Nige­ria could make the people lose hope and zeal for democracy.

The clergymen said the ongoing controversy sur­rounding the proceedings of the National Assembly gives ample evidence of the theatre of the absurd, which democratic repre­sentation has become in Nigeria.

Their statement read in part, “Simply put, those who claim to represent the peo­ple seem to have perfected the art of sabotaging the progress of their people. Indeed, the time may have come for Nigeri­ans to no longer simply roll over and accept non-repre­sentative decisions of the Assembly but to challenge them by all legitimate means.

“Ongoing electoral re­forms give another op­portunity for reviving the hopes of the people and confidence in the nation’s democracy. An important part of electoral reform, which is often ignored, is the education of the people who participate in building democracy.

“Only participation in the political process and adherence to the rule of law offer an enduring means of authentic change but people must be helped to understand this fact.

“We urge the media and civil society groups to sustain this education agenda so that Nigeria can reap the full benefits therefrom. We also urge our people to reg­ister and obtain their voter cards.

“Only this grants them the power to exercise their rights to determine who governs them from time to time. Our country will greatly benefit from this.

“In the face of our cur­rent national crisis and encroaching chaos, it is surprising that the Nigeri­an government continues to demonstrate a disturb­ing allergy for truth even when it is most evident.

“The recent effort by the presidency to malign the address of Bishop Matthew Hassan Kukah of Sokoto Diocese, to the House For­eign Affairs Committee of the United States of Amer­ica Parliament/Assembly in Washington DC on the Nigerian situation on reli­gious freedom is laughable, to say the least.

“Bishop Kukah, in his patriotic and frank pre­sentation called attention to some verifiable data and statistics about the Nigerian situation on that privileged internation­al platform.

“The Federal Govern­ment, however, has char­acteristically gone up in arms against the person of Bishop Kukah and his purpose. It is commonly said that when there is a problem in a democracy, more democracy is needed to solve it. Sadly enough, our current Federal Gov­ernment does not seem to subscribe to this.

“Our sympathies go to the Nigerians who bear the brunt of Nigeria’s de­bilitating situation because of economic depression and hunger, armed rob­bery, banditry, kidnapping for ransom, unemployment and injustice.

“We call on all Nigeri­ans to do all they can to help one another even in these hard times and work more assiduously to cre­ate a better society. To help the downtrodden and op­pressed, it is not enough to provide relief materials. It is just as important to fight for justice and fairness and protect fundamental hu­man rights.”