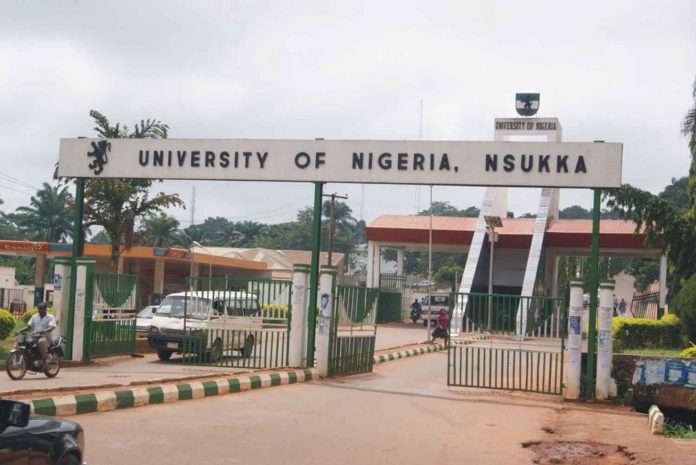 The University of Nigeria Alumni Association has accused the immediate past National President of the group, Ben Okoronkwo, and the university authorities of perpetrating corruption and deception in the association.

According to the Lagos chapter of UNAA, some individuals in the alumni have connived with the school authorities to siphon money under the guise of staging an award ceremony.

The UNAA Lagos chapter distanced itself from the purported event, emphasising that neither the Lagos branch nor the duly elected national officers of UNAA are aware of the events.

This was contained in a statement by the President, UNAA Lagos Main Branch, Orji Udemezue, on Thursday.

In the statement, Udemezue declared that Lady Linda Agua-Onyekwelu duly emerged as the National President of UNAA, after a failed attempt by Okonronkwo to secure a second tenure last year.

Udemezue, however, berated the Governing Council and the University of Nigeria authorities for working with the ousted President.

He accused them of intentionally seeking “to subject UNAA under their control for whatever selfish reasons.”

Part of the statement read, “I feel obliged to, once again, clear the air on the purported award ceremony being organised by some mischievous, misguided, and devious elements who parade themselves as the national executive leaders of UNAA.

“We have reliably gathered that these persons and their representatives have already collected some monies from some unsuspecting alumni and diverted same to their private accounts for the purported event.

“I would like to emphasise that neither the Lagos branch nor the duly elected national officers of UNAA are aware of these mischievous events or arrangements.

“For those of us who may be unaware of the recent happenings at the national leadership of UNAA, I would like to briefly remind us as follows:

“Ben Okoronkwo (the immediate past National President of UNAA) served a tenure between 2017 and 2019 – with the Lagos branch working closely with him in many ways.

“In desperation to serve a second tenure, he (Ben Okoronkwo) deceptively obtained a letter from the University Governing Council mandating UNAA to postpone its elections – without any regards to the constitutional independence and the corporate dignity of UNAA.

“At the UNAA 103rd National Executive Council Meeting/ 25th Biennial Convention (which is constitutionally the highest decision-making body of UNAA) which held in Nnewi between November 28 and December 1, 2019, the Convention decided to postpone the election (out of respect for the University Governing Council) but appointed an Interim Management Committee to conduct UNAA’s affairs pending the organisation of a proper election.”

The statement further alleged that despite the “constitutional expiration” of his tenure, Okoronkwo continued to parade himself as the National President even “when 11 out of his 15 member national officers had submitted to the Convention’s decisions”.

It continued, “Following several unheeded advice and admonitions to the Governing Council, the UNAA’s Interim Management Committee (set up by the 103rd NEC/25th Biennial Convention) went ahead to organise an election in line with its mandate and the constitutional provisions of UNAA – wherein Lady Linda Agua-Onyekwelu duly emerged the National President of UNAA.

“Ben Okoronkwo has therefore ceased to be the National President of UNAA.

“It is sadly important to note that the University Administration and Governing Council deliberately sought to subject UNAA under their control for whatever selfish reasons.”

The statement further urged the members of the association to shun the planned event of those it called “mischievous elements,” while rebuking alleged corruption in the system.

“It is on record that some innovative and transformational ideas/projects offered by some notable alumni, in the past, to uplift our alma mater was shut down by the university management due to some pecuniary interests.

“Is it any wonder that these mischievous elements who purport to organise an award veremony are collecting money from unsuspecting alumni and diverting the same into their personal accounts? Do they mean well by arranging an event without due regards to the properly constituted branches of the same alumni in Lagos?” the statement added.

Af24news’s efforts to get Okoronkwo’s side of the report was unsuccessful as he neither answered calls or replied to text messages as at press time.